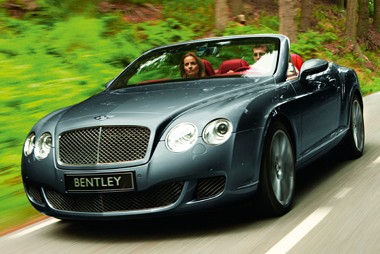 Bentley’s Continental GTC Speed is its fastest convertible yet.
And the introduction of its Speed version, distinguished by a 15% increase in torque, is expected to account for two-thirds of the GTC’s sales worldwide.

Bentley chief executive Dr Franz-Josef Paefgen said the addition of the GTC Speed “broadens the appeal of the GTC to customers who demand a more focused, open-top driving experience”.

But the Continental GTC Speed still holds the status that all Bentleys have, but it will also please performance-seekers, too.
It has 600bhp and reaches 200mph with the roof up. With the roof down its top speed is 195mph.

The car feels as luxurious as you would expect with leather seats, laser-cut wood veneers, rear parking sensors and a range of information options in the central console.

Sitting in the car is like being in a cocoon of opulence. As the foot hits harder on the open ground, the engine purrs and you can’t help but smile.

And nothing will catch people’s attention quicker than this car: AM’s test version was pearlescent white. Driving with a female friend for company, almost everyone we passed turned to look at us.

Even a cyclist stopped concentrating on the road ahead to take a look. A police car also followed us for a while, no doubt before finding out it was not missing from a gentleman’s extensive garage.
Fuel economy isn’t great – the official figure is 17mpg. But when you’re driving a car like this, who cares?
Performance car equivalents include Ferrari 430 and Lamborghini Gallardo. These are definitely the racier choice.
But those who opt for the GTC Speed will get some of the race-car feel along with the refined grandeur which the Bentley badge brings.