Few cars are as distinctive as the Smart ForTwo. The original model drew a storm of publicity when it entered the UK new car market in 2000 – initially in left-hand drive.

Suddenly city commuters and shoppers had a tiny runabout that could park in the tightest spaces, even nose to kerb. Some railway stations added bespoke ForTwo parking areas with reduced charges, and celebrity owners included singer Robbie Williams and Sir Stirling Moss.

ForTwo attracts a cult following from all social groups, but particularly with the middle classes, and 85% of buyers are aged under 40. Although demand was never as high globally as DaimlerChrysler expected, the UK is Smart’s third largest market.

ForTwo outlived the ForFour and Roadster models, and has made it into its second generation, which is launched in the UK this September. However, all 46 Smart dealers in the UK will receive left-hand drive For-Twos for pre-sell activity from May, ready for the London-Brighton Smart Festival.

Proposals to link London’s congestion charging policy to emissions from 2008 could play into the ForTwo’s hands. All engine variants fall into the sub-120g/km CO2 band and will be exempt from charging, saving owners at least £8 per day.

ForTwo’s styling is still unmistakable; however, 90% of the car is new. To meet crash regulations and EU pedestrian protection rules, ForTwo is 43mm wider and 195mm longer than the original.

The extra length also allows for 220 litres of space in its luggage compartment – 70 litres more than the old ForTwo had.

Its new 1.0-litre engine, a collaboration with Mitsubishi, has three cylinders like its 700cc predecessor. It will be offered in three states of tune: 61bhp, 71bhp or a turbocharged 84bhp. All have a five-speed automatic transmission, which changes faster than the old version, but still isn’t the slickest in the market.

Mainland Europe also gets a 45bhp diesel that achieves 84mpg, but Kelly has rejected this for the UK because it “has very slow acceleration” and a €1,200 price premium. Instead, an electric version may be introduced at the end of the decade. A Brabus variant is expected in late 2007.

Cabriolet versions have a fully automated electric soft top that can be adjusted to any position, and at any speed.

The coupé version, in basic Pure specification, has a plastic roof – but Pulse and Passion trims get a transparent polycarbonate panoramic roof.

Kelly won’t reveal sales targets, but admits he’d like to surpass the 8,000 Smart sales record of 2003 eventually. Last year’s sales were below 4,000 units.

DaimlerChrysler claims the new ForTwo is more comfortable, versatile and fun than the original.

Our test route took in rural roads and motorway, plus a frantic morning rush hour in the congested heart of Madrid, where ForTwo showed its worth as a city shuttle.

ForTwo has plenty of appetite for sprints between traffic lights, and its 8.75m turning circle makes light work of u-turns and tight corners. Its high driving position gives a good view and overcomes fears of being squashed by larger vehicles.

As expected, ForTwo will never be the popular choice for motorway journeys as it gets noisy at speed and, in 71bhp form, struggles to maintain speed on inclines. But it is certainly improved, more comfortable, and retains its great sense of fun. 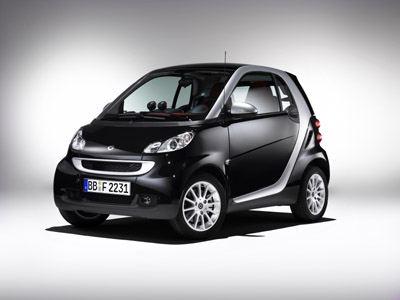 Most powerful Smart ever built