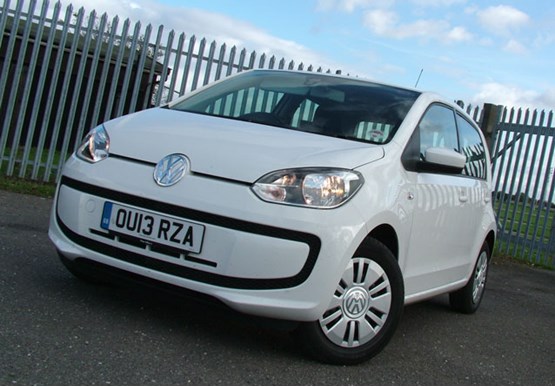 I am constantly struck by the Volkswagen Up’s ability to hide the fact that it is such a small car. In the past two weeks, it has tackled several long-distance journeys – each a round trip of some 250 miles – and without leaving me stressed and requiring a visit to an osteopath.

Despite being designed as an around-town runabout, this Up is very comfortable and stable cruising once it’s up to motorway speeds, even when laden with photographic kit. The engine noise is a bit buzzy at those speeds, as could only be expected of a 1.0-litre three-cylinder engine that’s working steadily at 4,000rpm.

However, the noise doesn’t intrude too much on conversations or the sound of its stereo.

It’s a superb car. As someone who 20 years ago endured fortnightly crawls home to Norfolk from university in London in an iceberg-slow 1.0-litre Polo, then Volkswagen’s entry car, I can truly appreciate the advancements made since.

The long journeys have helped the Up’s trip computer hit the 50mpg mark. Of course that’s not as high as the official EU test figure, but it’s acceptably frugal. For customers seeking real economy and zero tailpipe emissions, Volkswagen has opened order books for the electric-powered E-Up, with a maximum range of 93 miles on a single charge.

However, unless they’re corporate buyers making a statement, they may baulk at the initial outlay. The highly specified E-Up is priced at £19,250, which could pay for almost two of the petrol-engined alternatives.

Demand for the E-Up must be destined to remain low when the petrol version is such a competent, cheap and good quality runabout.

MSN Cars
That Volkswagen builds a five-door Up when many of its rivals only offer three-door vehicles is a massive plus point. It proves city cars don’t have to be small, impractical boxes on wheels, only bought for efficiency. It’s an impressive all-round package.

The AA
The Up is in some ways brilliant – it’s not that great for carrying luggage, but as simple and effective city transport it’s excellent.