The disguise continues to drop off Vauxhall’s new Vectra replacement.

Along with the dowdy looks, out goes the V-badge, replaced by the new Insignia name when the car is launched this summer.

Under the remaining light disguise, it’s clear to see that the Insignia has kept the flavour of the GTC concept car.

There’s a four-bar, chromed grille and deep recesses in the corners of the spoiler, while the sides are characterised by more pronounced wheelarches.

Inside the bigger cabin, drivers are faced by a three-spoke steering wheel and chrome accents brightening the interior.

As you’d expect in this category, gadgets galore will be available, including keyless go and radar-controlled cruise control.

The majority of Insignia models will be powered by humdrum 1.8 petrol and 1.9-litre diesel engines – but there will be a wide range of powertrains on offer to cater for every budget and strata of fleet customer. VXR models will feature a near-300bhp V6 petrol or, for the first time, a 250bhp diesel.

GM’s latest Epsilon 2 engineering underpins the Vectra replacement, so that means most models will be front-wheel drive. Four-wheel drive will be available on more powerful models.

It’s the company’s latest platform and will form the basis for the Saab 9-3 and 9-5.

The Insignia will also be sold as a Saturn in America, and as a Holden in Australia. Make no mistake, this is a crucial car for GM. 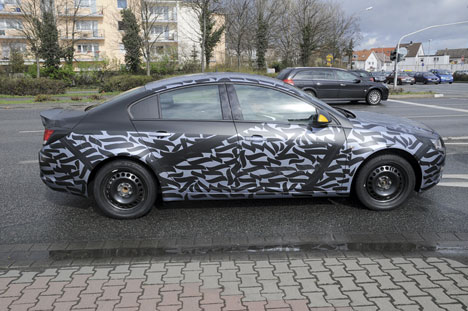