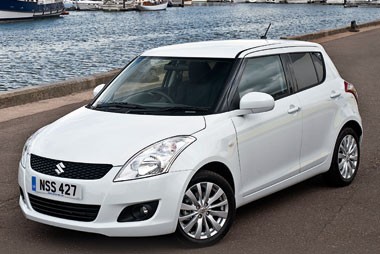 If selling cars relies on getting customers into showrooms, then Suzuki dealers might have a problem with the all-new Swift.

The issue will be getting drivers to notice it; the cute styling of the out-going model has been kept and at a glance little appears different.

Posing the question to UK management about whether any innovative marketing campaigns were planned to address the situation – the answer was no.

If customers do venture into dealerships they will find much is new, not least the Swift’s footprint.

The car is 90mm longer than its predecessor, as well as being higher and wider and with 50mm extra in the wheelbase.

Both three and five-door models are available, but there is just a single engine, a 1.2-litre 94bhp petrol which returns 56.5mpg. CO2 emissions of 116g/km are a 17% improvement on the outgoing model.

Five-speed manual and four-speed auto transmissions are available. A stop/start version is available in some markets, but as it makes only 3g/km difference it’s not earmarked for the UK.

However, there will be more interest in the Swift Sport, with a 1.6-litre petrol engine, due late in 2011.

The current version has been a sleeper hit for dealers and will stay on price lists until its replacement arrives.

Around town the car feels very at home. It’s nimble with direct steering and a very acceptable ride. Suzuki is keen to promote the improvements in driving dynamics and handling, which are evident in slower urban traffic.

But the Swift feels a little out of its depth at motorway speeds. The engine quickly starts to sound like it’s working too hard.

This is an ideal commuter car, but not great for longer journeys.

Suzuki’s designers have kept good stuff from the old Swift and it has matured into a decent, if not class-leading, B-segment package.