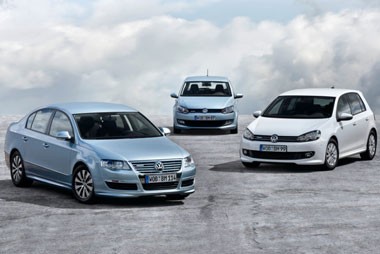 The latest Volkwagen Bluemotion offerings continue to push the environmental cause, achieving the lowest CO2 outputs yet.

The Golf Bluemotion is the first on the scene. The Passat Bluemotion follows in February, and the new Polo starts UK production in January with first deliveries scheduled for March.

The cars are “for someone who wants to make an environmental statement”, says VW.

However, marketing will focus on cost saving rather than the green credentials.

“It will look at fuel savings and cost savings you can make from Bluemotion products rather than an environmental focus,” the carmaker added.

Typical Bluemotion customers are more discerning than an average car buyer, preferring the understated to the overstated option.

For the Polo Bluemotion, there are many customers in higher bracket households who don’t need to economise but resent paying extra on fuel tax to the Government.

The new model matches the fuel consumption of the outgoing Polo Bluemotion, capable of returning 74.3mpg on a combined cycle and emitting 99g/km CO2 making it tax-free. Around 50,000 units will be sold in 2010.

A new engine for the Passat – the same 1.6-litre TDI as the Golf Bluemotion – means significantly better fuel economy over its predecessor – from 57.6mpg to 64.2mpg for the saloon and estate models while CO2 emissions fall from 128g/km to 114g/km for both models. Prices start at £19,000 for the saloon model and £20,200 for the estate.