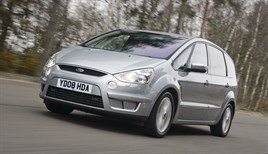 Three green cheers, Ford of Britain, for announcing plans to cut dealers’ emissions by up to 10%. But one of your number seems to have jumped the Carbon Trust gun.

Last Sunday, my wife and I went shopping for a used people carrier. We knew roughly what we wanted: seven-seat flexibility, diesel, something with more personality than my garden shed (yes, some garden sheds are lovely, but mine isn’t). And because I have a history of buying cars that are not fit for purpose (in the last 18 months, these have included a 1986 Audi ur-quattro, a 2003 MG ZR 180 and a 2003 Renault Laguna estate 1.9dci) my wife insisted I get some advice from someone sensible. Like our son, Tom (you may know him – he ‘manages content’ for AM). “You should look at the Ford S-Max,” he said. “Clever seat arrangement, comfortable, excellent road manners, and reasonably economical if you don’t drive like a complete maniac.” Not sure what he meant, there, but he may have been referring to when I used to give him a lift to work. The behaviour of some commuters on that route was often outrageous.

Where was I? Oh, yes. People carrier, to purchase, one.

One area of the city close to where we’ve been attached for nearly 30 years used to be rolling countryside. Actually, that’s doing it a bit of a favour: most of the land now occupied by the brick, glass, steel, Rolex and concrete of vehicles dealerships was unappealing bog and potential nuclear power station. Although, obviously, it was an important habitat for the Greater Crested Newt and several endangered mosses.

Anyway, we went car window-shopping in the compact part of town favoured by car showrooms, factory outlets and an adult goods wholesaler.

Swiftly, we ruled out Kia and Hyundai buses on the grounds of taste, Renault because my faith in the brand has been shaken by recent ownership. The Peugeots are too funky, the Seat sales staff don’t shave, I couldn’t work out what multi-seater Toyota offers these days, the Vauxhall Zafira is worthy but dull and, much as I’d like a Mercedes-Benz or an Audi, my wife doesn’t have annual membership of a health spa gymnasium. I should have looked at a few others, but it was hot – the warmest summer day since records began earlier in the year.

So, what does one do when it has been suggested – by someone who knows what he’s talking about – that one takes a look at an S-Max? That’s right. I got sidetracked and went to ogle a very tidy Rover P6 3500 on the forecourt of a classic cars outlet. Tidy, that is, apart from the differential oil drips and some brown stuff leaching through the bolt-on panels.

Mrs S has a wide vocabulary.

I first visited our local Ford dealership in the 1980s when it had some quaint multi-storey premises in the city centre. For probably better, it was one of several firms that moved out of town in the early 1990s and has since been more conveniently sited on the edge of our particular Motown. I’ve dropped in a couple of times over the years for various reasons and have always found it lacking in the personality and scale that the previous place had. This Sunday it was more impersonal than ever.

The banners bristling in the hot breeze confirmed that used cars were outside to the right of the main showroom, so we made our way over from a car park to what looked like a couple of Galaxys and maybe an S-Max.

Correct on both counts. But the 61 S-Max had a ‘sold’ sticker on it. We gazed into the Galaxys and couldn’t see much because of the tinted windows. There were quite a few grey Mondeos there, too. Something rubbery was burning in a field opposite, and I’m pretty sure I could hear a pair of Great Reed Warblers attempting to communicate through the ring road roar.

OK, I’m not too keen on being pounced on the second I enter any retail establishment, but I was at least expecting someone to emerge from the confines of the main showroom to ask me not to smear the Galaxys’ windows. I could see a chap in a white shirt in the distance, but he seemed to be busy. My wife and I gave each other a ‘sod this for a game of soldiers’ look, walked back to the car and drove away – first towards a locked barrier marked ‘exit’, then back the way we came in.

Motorpoint is about half a mile away. I think you know where I’m going with this.