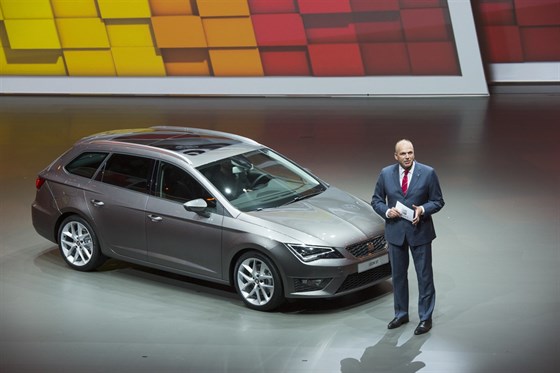 The Seat Leon range of body styles is rounded off with the arrival of the ST estate, which costs £825 more than the five-door hatch for comparable models. For that premium, you get a wagon with a 587-litre boot with the rear seats in place or, with the seats folded down, as much as 1470-litres of cargo space.

Much of this extra carrying capacity compared to the hatch comes from an extended rear overhang, which is 27cm longer than with the five-door hatch. Seat has also added remote release handles in the side walls of the boot to make it easier to drop the rear seats. With the back seats dropped down, they sit flush with the load floor to give an uninterrupted and flat surface for sliding heavy items in and out. These handles are standard on SE and FR models.

All STs come with roof rails and a double floor in the boot that lets you separate items, so you can have dirty boots in the space below and keep the upper section for clean items. A through hatch helps cope with longer items, while Seat also offers the option of a folding passenger seat to cope with even longer loads.

The rest of the ST’s cabin is much the same as the hatch’s, while P11D prices start at £16,620 for the 1.2 TSI petrol engine model. This 104bhp engine can be ordered with a six-speed manual or seven-speed DSG dual-clutch gearbox, each offering 57.6mpg and 114g/km Co2 emissions.

Company drivers are more likely to be drawn the 1.6-litre turbodiesel with 104bhp and five-speed manual ’box. It offers 99g/km and 74.3mpg as standard, but is also available in Ecomotive trim that increases economy to 85.6mpg and cuts emissions to 87g/km. The Ecomotive model comes in SE trim, while the standard 1.6 diesel is offered in S and SE forms. As well as the S and SE trims, there’s also the sporty FR, though this is not offered with the 1.2 TSI or 1.6 TDI engines.