When a dealer group that sits in the top third of the AM100 cites the success of a temporary franchise location in its annual financial statement, it suggests a brand on the move.

Mark Lavery, the managing director of  Cambria Automobiles, sang the praises of Aston Martin when he likened the effect of the new DB11 on registrations to that of Jaguar’s F-Pace in the first half of 2017.

“The DB11 is flowing through and sits alongside the F-Pace in having had a transformative effect,” said Lavery, who was celebrating the immediate profitability of Cambria’s new Aston Martin franchise on Kenilworth Rd, Hampton in Arden, Solihull.

“We bought a temporary piece of freehold, set up an Aston Martin dealership with no database and will make a profit in the first full year,” he said.

Cambria has Aston Martin sites in Birmingham, Welwyn and Brentwood.  Alongside Pendragon, it is the brand’s biggest UK dealer partner in a 21-strong network.

In the past 12 months, Dick Lovett, Stoneacre and Sytner have also become Aston Martin franchisees. This is happening alongside Aston Martin’s  corporate identity makeover and its ‘Second Century’ plan to double vehicle production from 3,687 in 2016 to more than 7,000 in 2018.

Aston Martin needs to boost those volumes to become viable – it holds the unenviable record of having survived seven periods of insolvency.

Since 2008, when it was acquired from Ford, Aston has been owned by two investment funds in Kuwait and the Italian-based private equity fund Investindustrial, which used to own Ducati.

Daimler also owns 5% as part of a deal to supply Mercedes-AMG V8 engines and electronic technology for future vehicles.

It had spent £161m on product development and prepared to commit £200m to a new production facility in Wales.

In May, however, the brand posted a second successive quarter of profits for the first time in a decade, a £5.9m pre-tax profit during Q1, up from a loss of £29.7m a year earlier.

The brand also completed a £550m refinancing of its debts during Q1, saving more than £10m a year in interest payments.

Mark Wilson, executive vice-president and chief financial officer, said the deal would deliver “a solid financial platform on which to continue to grow”.

‘The pace of change has been relentless’

Dan Balmer, recently appointed Aston Martin’s president for the UK and South Africa, attributes the pace of recent change to the arrival of  president and chief executive, Andy Palmer, from Nissan in 2014.

“The first thing he did was attend the Paris Motor Show,” recalled Balmer, who was formerly Aston’s global marketing director and general manager of Rolls-Royce Asia-Pacific before that.

“He got us together on the stand and started to make plans for the following year’s Geneva Motor Show. We were all a little stunned. The pace of change since then has been relentless.

"Dealers see us now and want to invest. They see that if Aston Martin is going to go from 3,500 to 7,000 units that will boost business" Dan Balmer, Aston Martin

AMR seeks to forge stronger ties with the success of Aston Martin Racing, following the team’s success in the FIA World Endurance Championship and a GTE Pro class win at the 2017 Le Mans 24-hour race with the sale of 300 examples of race-inspired Vantage Models and a range of accessories to be sold and fitted by dealers.

The Valkyrie is an Aston Martin hypercar created with Red Bull Racing.

Limited to a production run of 99, the Valkyrie will have a 6.5-litre V12 Cosworth engine as part of a hybrid drivetrain and is expected to cost £2m-£3m.

Aston Martin’s ‘Second Century’ plan schedules a product launch every nine months. Balmer said the brand was “only five to 10%” of the way through its product journey with the new Vantage and variants of the DB11, including a Volante (convertible), due next year.

The replacement of the whole sports car range follows that, meaning a new Vanquish is also on the cards.

“That’s why dealers see us now and want to invest,” said Balmer. “They see that if Aston Martin is going to go from 3,500 to 7,000 units globally that will boost business.”

Aston Martin will also reprise a relationship with design house Zagato next year to create variations of the Vanquish – 99 Shooting Brakes, 99 Coupes, and 99 soft-top Volantes, all expected to be priced about £500,000. It will also build 28 roofless Vanquish Speedsters, to be priced from £1.3m. 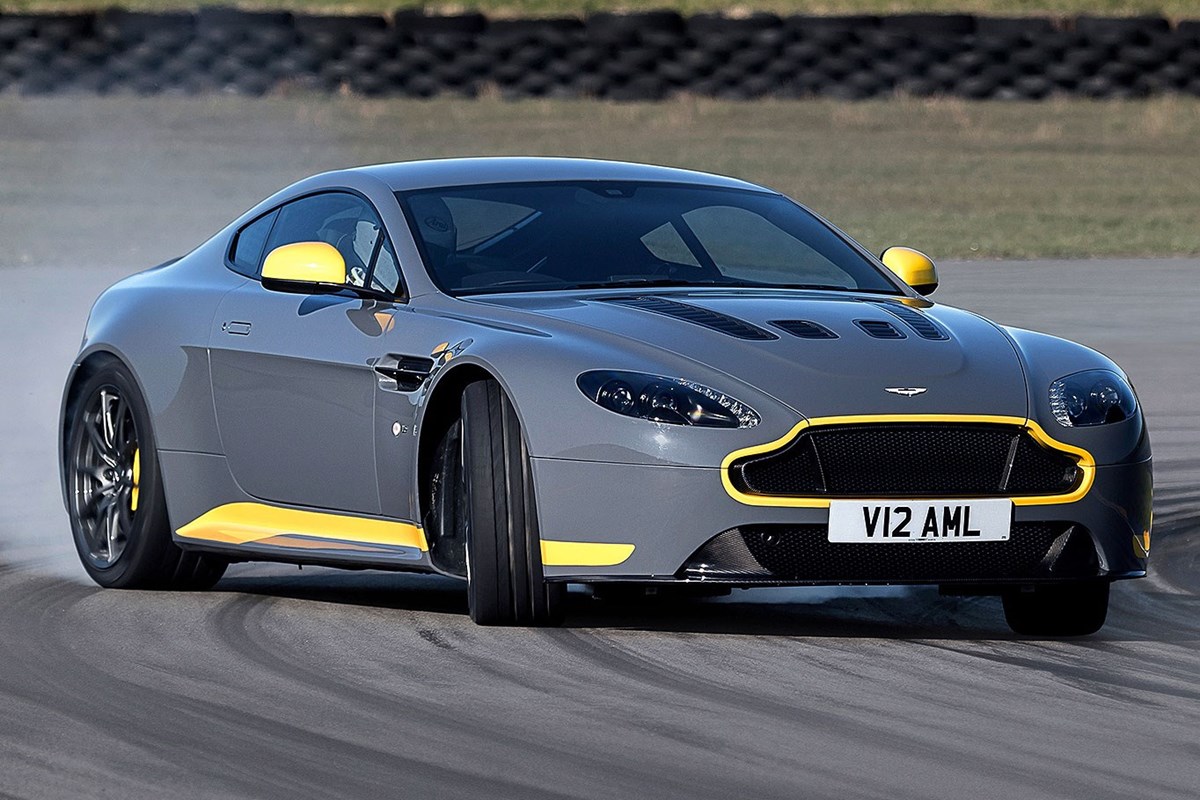 A more significant addition to the Aston Martin line-up in volume terms will be 2019’s DBX.

Aston’s debut SUV, it will be the first vehicle at a £200m production facility currently under construction within two former RAF aircraft hangars at St Athan, in the Vale of Glamorgan.

Showcased in EV form at the 2015 Geneva Motor Show, the DBX concept was also a forerunner of RapidE, a recently announced electric version of Aston’s four-door Rapide.

A run of 150 RapidEs will be built as part of a £50m deal with Chinese venture capital company ChinaEquity to meet China’s 2020 fuel economy targets.

Commenting on the Government’s plans to ban the sale of purely diesel- or petrol-driven vehicles from 2040, Palmer said the British car industry remains “deeply rooted in gasoline and diesel”.

He added: “The UK excels at premium and luxury cars, from Bentley and Rolls-Royce to Aston Martin and McLaren.

“But luxury car buyers around the world in 2040 will still require gasoline engines.

“If your home market suddenly bans gasoline, then really practically speaking, where are we going to test the things?”

Investing in the brand: a new CI

Despite the addition of EVs, Balmer said charging infrastructure was not a prerequisite for recently developed showrooms.

He said: “Obviously, Aston Martin needs to invest in that, but RapidE is a limited-run project for us and when we know how the allocation is to be organised we’ll know which dealers need to be brought up to spec.”

Aston Martin’s “Barcelona Palladium” corporate identity features sandstone tiles, green-tinted glass and the option of a display car that appears to float on water – aping those at Gaydon – along with a ‘Q by Aston Martin’ lounge, where customers can spec their vehicle.

Balmer was unwilling to be drawn on the cost of the CI update or dealers’ return-on-sales, but Aston Martin hopes its growth will deliver more used vehicles and aftersales opportunity.

This year’s new car sales surge has seen its new to used ratio of 3:1 shift in favour of the new product, he said.

Balmer said offering its own finance – Aston Martin Financial Services (AMFS) is underwritten by Alphera – and the reassurance of standard five-year service plans introduced with the DB11, gave dealers greater opportunities to introduce customers to the brand.

Of the network’s finance business, 40% is with AMFS, with much of that in PCP. Balmer said: “It’s not really about affordability. It’s a smarter way of buying a car on retail finance.”

Aston Martin wants its dealerships to be a “destination”, but Balmer acknowledges some customers’ desire for distance.

Covering an area that includes Cornwall in the south and Pembrokeshire to the west, Dick Lovett’s Bristol facility employs a transporter to deliver vehicles to and from the workshop.

However, Balmer insisted that experienced and “rigorously trained” technicians are often involved in face-to-face discussions with customers. Their specialist skills require many new Aston Martin facilities to take on staff from operators they replaced.

Shaun Foweather, managing director at Stoneacre, told AM that two of its recruits for the workshop in Newcastle had a combined 53 years’ experience with Aston Martin.

Balmer said: “Myself and Andy Palmer were apprentices, so we’re invested in that too. There is a long-term challenge to bring people up to standard.”

The Aston Martin Technical Academy at Gaydon is seen as one answer to that challenge – it is training 750 new staff for the new production facility in Wales.

Balmer said; “It’s essential that customer-facing roles in the network are filled by people who have seen the hand-built construction process with their own eyes.” 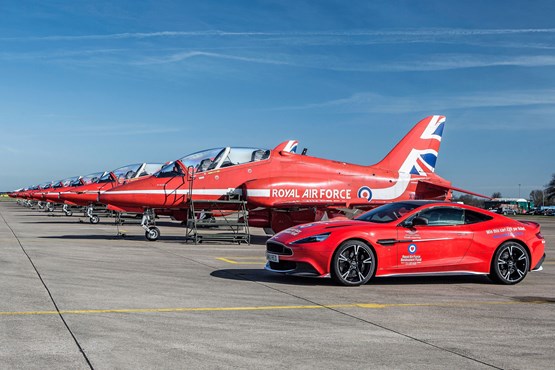 One Aston Martin dealer’s embrace of the bespoke possibilities of the ‘Q by Aston Martin’ concept has captured the headlines in recent months.

Earlier this year, Jardine’s Cambridge operation completed the handover of eight V12 Vantage S Spitfire 80 cars to celebrate the 80th anniversary of the Supermarine Spitfire’s first flight as part of a campaign that fused a sales drive with marketing, PR and charity work.

experience, a personal tour of the adjoining museum and a talk from a WWII Spitfire pilot.

Jardine’s Cambridge operation is now repeating the format with the “Red 10”, a limited-run of 10 Vanquish S cars to celebrate the RAF’s Red Arrows.

The Vantage Spitfire sale resulted in donations to the RAF Benevolent Fund and one of the bespoke Vanquish S cars is being raffled off for the charity.

Balmer said: “Spitfire, and soon the Red Arrows, are great examples of one dealer taking the themes of Q by Aston Martin and hinging it on a centre story.

“Jardine, at Aston Martin Cambridge, have done a great job of encapsulating what matters to their region, their area.

“There’s a great strength in that marketing and it captures what Aston Martin is all about. It’s about built-to-order cars, but it stretches our ability to take a blank canvas car and make it into something very special.”