‘Nobody spends enough time thinking about the future’ 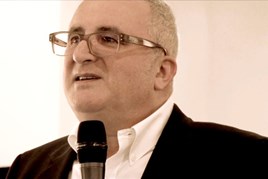 Franchised dealers should not fear autonomous cars, or worry about who will own or use them, according to a futurologist.

Jonathan Margolis, who writes about technology for The Financial Times, told members of the AM Executive Breakfast Club that some motor retailers may see the emergence of self-driving cars as a threat to their livelihood, but he believes there will still be many opportunities to sell, maintain, recharge, store and refurbish such vehicles.

Margolis said the technology is not so far-fetched, and there is such momentum behind it that it will become reality. There are also clear benefits to society – autonomous cars are seven times more efficient at seeing obstacles and stopping, so collisions causing serious or fatal injuries will become rare.

“Nobody spends enough time thinking about the future. We are too concerned about tomorrow about five years’ time. We fixate on the short term, and it’s understandable that we do. Yet the world truly belongs to companies and organisations that spot upcoming trends, that identify what people need before they know they need it, and focus relentlessly on five or 10 years ahead – future-proofing both in a defensive way, in protecting the business, and proactively taking advantage of change.”

Motoring technology in 20 years will not be as we recognise it now, he said. It will be the equivalent of typewriters being replaced by word processors and retailers will need to adapt.

At the meeting in Manchester, Margolis suggested there may even be more cars on the road, because autonomous cars will be safer and can create more space on the roads due to improved traffic flow.

As to who will own autonomous cars in the future, he believes local authorities, banks and corporations may invest in fleets of them for use in pay-as-you-go mobility services. These vehicles could be in almost constant use, and consequently could rack up significant mileages, and require more frequent maintenance.

Margolis suggested the current car ownership model is irrational, as people pay large sums for technology that they use for a fraction of their day.

“Having this complex machinery standing unused by the roadside for most of its life is quite silly,” he added.

On the maintenance aspect, Margolis said carmakers must consider an ethical question with future autonomous cars: if its sensors identify that a component is heavily worn or a system is likely to fail, will it allow an owner or passenger to still use it, or will it refuse to go anywhere except to a workshop for repairs? If it has been programmed to do the latter, then franchised workshops could be guaranteed a revenue source. Dealers could also have contracts for storing and recharging any excess self-driving cars outside of peak usage periods.

Margolis believes autonomous cars will “wipe out jobs” where people drive for a living, but will create new jobs in other sectors. There could be negative implications for car park operators and traffic police, but positives for pubs and restaurants.

However, for carmakers there could be greater diversity of models and equipment to cater for pay-for-use mobility services – fleets could operate cinema cars, office cars or gym cars on hire schemes to make passengers’ travelling time more useful or pleasurable.

A knock-on effect could be a rise in rural property prices, as commuting to work no longer becomes a chore, he said.

Margolis talked more broadly about likely technology trends ahead. He warned against the ‘cartoon’ image of the future, such as internet fridges, flying cars, internet glasses, humanoid robots and food pills. To succeed, future technology needs to fulfil a human’s needs better than what we have now, he said. Much will be very similar to what we have now, but it’s not essential to be bigger and faster.

He cited Concorde as an example. People expected the supersonic passenger jet to be the aircraft of the future, but the larger, slower Boeing 747 was far more successful because it could carry many more people in relative comfort across longer distances, and at lower costs.

“The real future is a mixture of common sense and human nature. If a thing sounds daft, it won’t catch on,” said Margolis. He said businesses don’t need to worry about being ahead of the curve – Apple is hugely successful, but wasn’t early in the market with the iPhone or iPad.

However, he did warn retailers to beware writing off technology as obsolete. Although young people are heavily into social media, they still use email, but “only for the important stuff”, and that will still be the case in 10 years’ time, he said.

Margolis is certain some technology is set to take off:

■ Artificial intelligence “up to a point”. He said humans want machines and software to be our slaves and to be very good at what we need them to do, and to liberate people from essential monotonous tasks so they can do more interesting things, but they won’t become cleverer than the human brain.

■ Biotechnology. In 10 years’ time, people will have their genetic markers on a card to present to hospitals to identify exactly what bespoke treatment they need.

■ Delivery by drones. In suitable rural areas, this will become likely, as it reduces cost, time and risk to human life.

■ The ‘internet of things’. It is here already – for example, bus stops communicate with buses to accurately display when the next one is due – and that will only increase.

■ Virtual Reality. ‘Mixed reality’ is more likely, according to Margolis. This would allow dealers to virtually present a car that has not even been built yet. Experiencing virtual reality is exciting initially, he said, but VR isn’t yet changing people’s lives enough for them to spend a small fortune on it.

The next AM Executive Breakfast Club