Why stressed employees may be costing you sales 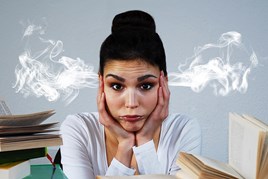 Do you need to better protect the health of the talent pool at your dealerships?

attitudes to mental health problems, MIND, the mental health charity, published research claiming that one in six UK workers experiences a common mental health issue, such as anxiety, stress or depression. ACAS, the

Warning signs that an employee’s mental health may be suffering include:

A study for the Mental Health At Work Report 2016, published by Business In The Community, showed the disconnect between company policy and practice. It found 60% of board members and senior managers believe their organisation supports people with mental health issues. However, only 11% of workers said they had discussed a recent mental health problem with their line manager, and half said they never would.

Jon Heuvel, an employment law partner at Shakespeare Martineau, said workers at any company in France with more than 50 staff recently won the ‘right to disconnect’ from work emails and text messages outside of normal working hours. Such action is unlikely in the UK, said Heuvel, but it was a timely reminder that dealers and carmakers need to take the health and well-being of their employees seriously.

He said the proportion of tribunal claims citing work-related stress as a contributing factor has increased significantly in recent years, and employers are understandably concerned about how excessive job pressure affects productivity.

Heuvel believes employers should take care to ensure that workers are not over-using digital devices during downtime or holidays. A poll of 2,000 workers by Glassdoor, a recruitment website, found half had done some work during their holidays.

“The proliferation of smartphones and other digital devices, and the increasingly widespread use of remote access facilities has almost certainly contributed to a culture where customers assume workers are available on a 24-hour basis,” he said.

For consumer-driven businesses, banning workers from accessing their inboxes or communicating with clients out of hours is not practical or realistic. However, employers could introduce procedures that encourage employees to take a proper break during their time off.

In 2014, Daimler allowed workers to use an out-of-office message stating that emails are being deleted while they are on leave. Dealer group Peter Vardy closes the business on Sundays to allow staff to have a proper break to enjoy family time. Peter Vardy, chief executive, said his colleagues are happier, and sell more cars over six days, as a result.

“Annual leave shouldn’t be an extension of the workplace, so don’t make it that way by sending employees countless emails that could probably be held off for a few days,” said David Price, a director at Health Assured.

Dealers should have a process to identify and minimise harmful stress in the workplace, but technology may also help. Research from AXA PPP, for its Health Tech & You State of the Nation survey, found 57% of 1,200 working adults surveyed would be open to wearing a fitness band or similar health-monitoring device if it was supplied for free by their employer. The figure falls to 34% if the device was not paid for by the employer.

Chris Tomkins, AXA PPP’s head of proactive health, said the increased use of health tech in the workplace “could so easily be a win-win for both employer and employee. For the first time, it is possible to support an individual throughout their journey from better understanding of their health to actual improvements through smart digital platforms.”

MIND, the mental health charity, has webinars aimed at companies wanting to improve workers’ wellbeing and engagement. It provides general recommendations, and features a discussion between several experts in the field.

The Health and Safety Executive (HSE) website has guidance for employers on managing employees’ stress and mental health at work, plus case studies on various companies and public bodies, links to sector specialists and downloadable guides.

Mary-Clare Race and Adrian Furnham wrote Mental Illness At Work in 2014 as a guide to help people managers to identify potential sources of work-related stress. Lauded by a number of academics, the book aims to transform the way mental illness at work is viewed.