How car dealers can recognise and reward employees 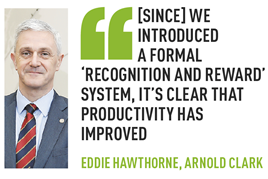 High Street retail models are often cited by motor retailers, but it seems John Lewis’s profit-sharing staff reward system is not something deemed appropriate by many in the sector.

As attempts are increasingly made to shift the balance of reward from commission-based bonuses towards the reward of good customer service, the acknowledgement of staff achievement and, in certain cases, a level of empowerment seems to be key.

“Any ‘reward’ scheme has to be very carefully managed, because as soon as you introduce a financial incentive, behaviour changes and it tends to be to the wrong behaviour,” said John Kiff, a coach at the Lean Auto Retail consultancy and senior adviser at ICDP.

“There’s always a debate about sales staff – whether they should receive a large salary and a small commission, or vice versa – but might they want to sell new vehicles, rather than pre-owned, if they’ll get a bigger bonus?”

Kiff prefers rewards that accrue to departments or teams, particularly given the long-term issues related to time-saved bonuses, where a technician is rewarded if they ‘beat’ the time for a job.

He said: “The likely result is that some people regularly pick up larger bonuses, when others in the same team do not. That can only be divisive.

“If you want to recognise and reward people, and make them feel good about what they do, then immediate congratulations, allied to team bonuses, is a much better and fairer model.”

At Vertu Motors, an array of recognition and reward schemes has been embedded into the group’s culture by chief executive Robert Forrester.

He blogs to all 5,500 staff every 48 hours, sends an email and updated ‘league tables’ to every sales team on Saturday nights, and hand-writes letters to those deserving particular praise on Monday mornings.

Forrester also takes personal charge of a sophisticated structure of conferences, social events and dealership visits during the year, culminating in its CEO Awards every November.

With about 200 general managers in the group, competition is fierce and the reward – a holiday in the Maldives – is much-prized, but Vertu takes care to highlight and reward achievements throughout its organisation.

Apprentice technicians, valeters and telephone receptionists are among the recipients of 30 awards and there’s no restriction on the same award going to the same dealership in successive years.

“The team at Sunderland has won the Motability award six years in a row, and the Chingford team has picked up several awards too,” said Forrester.

“When someone hits an anniversary for continuous service, we highlight their achievement and if it’s a big anniversary, we’ll take them away with their partner and it gives me an opportunity to meet them.”

Forrester also spends significant amounts of time visiting Vertu sites. In early July, he made a week-long tour of 25 dealerships.

Eddie Hawthorne, chief executive and managing director of Arnold Clark, also regularly engages in “management by walkabout” in an attempt to empower employees.

Three years ago, Arnold Clark established its Think Customer initiative, which introduces a Think Customer champion, voted for by their colleagues, in each branch.

Think Customer meetings involving sales, admin, servicing, parts, accounts and valeting, but no site management, have resulted in thousands of ideas to improve customer satisfaction, many of which have been implemented.

Hawthorne said: “We also introduced a formal ‘recognition and reward’ system, and it’s clear that productivity has improved and that our business practices and processes are working more efficiently.”

Hawthorne said the TIP structure had been “easy to implement and to monitor, which wasn’t the case for the old bonus system”.

He added: “We’ve always had long-service awards in place, and although we’ve all put our heart and soul into looking at how to further enhance our recognition and reward programme, we think the current systems work well – for the benefit of the business, of the staff and most importantly of all, of the customers.” IAN HALSTEAD