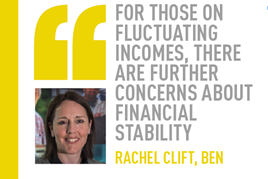 A combination of financial insecurity, a millennial workforce and a shift towards low-pressure car sales delivered by a showroom workforce of product ‘geniuses’ may accelerate a move towards basic salaries.

According to the results of a survey conducted by the Royal Society for the Encouragement of Arts, Manufactures and Commerce (RSA) three quarters (73%) of British workers are now concerned about the cost of living outstripping their take-home pay.

Rachel Clift, health & wellbeing director at Ben, who last month encouraged businesses to “look after their own” and support employee’s mental health needs as she shared details of Ben’s 2018/19 Impact Report, warned that all dealership employees can be vulnerable to financial difficulties in the current economic climate.

“Money worries, such as debt, are the second biggest reason why people contact Ben for support,” said Clift.

“Last year, money worries accounted for 37% of requests for support from our helpline, after mental health at 52%.

“Our 2018 annual industry survey results highlighted that over a quarter of automotive industry people said they had struggled with debt in the last 12 months.”

The Populus survey that formed the foundations of the RSA’s recent research – polling 2,048 UK adults – found employees were also concerned about their future finances. Almost half (45%) said they don’t expect to have enough money in private pensions and other savings to maintain a decent standard of living in retirement.

The RSA found that 59% of all workers would struggle to pay an unexpected bill of £500.

Fabian Wallace-Stephens, a senior researcher at the RSA, said: “More people are in a job than ever, but below the surface of record employment figures, increasingly we are seeing the link between hard work and fair pay collapse.

“Many of those ‘just managing’ are a financial shock away from failing to pay rent or pay a childcare bill, while even people on higher incomes fear the grinding effect of inflation, flatlining pay and falling living standards.”

Clift said debt had particularly affected those working in the sales (and aftermarket) sectors of motor retail and suggested that the move away from the target-linked pay of traditional sales roles had fed the trend.

She said: “We’re currently living in uncertain times, with austerity and the constant pressure of cost-saving taking its toll. For those on fluctuating incomes, there are further concerns about financial stability.

“Having a stable income helps people to budget for bills and other outgoings, plan for the future and enables them to secure their housing, such as getting a mortgage or entering into a rental agreement.”

However, it has been suggested that emerging payment models could hamper car retail workers’ ability to earn the bigger wages they have become accustomed to.

Speaking to AM for this year’s Choose Your Supplier supplement, Ed Steele, the managing director of Steele Dixon Recruitment, said he empathised with traditional sales staff who had suffered the impact of the introduction of low-commission employees into the sector.

He said that, while broadening the net to include non-automotive retail staff from the likes of McDonald’s and Currys PC World had reduced the pressure on retailer recruitment and wage bills, it had meant that “many traditional sales executives who had become used to earning £60,000 a year were being driven out of jobs”.