Leaders must set the right tone to prevent bullying 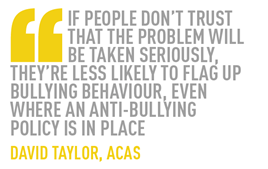 The recent inquest into the suicide of an 18-year-old apprentice mechanic should serve as a tragic reminder to motor retail companies to ensure they have robust procedures in place to prevent workplace bullying.

The inquest into the death of George Cheese ended last month with a ruling that his employer, Reading Audi, was not to blame, and that contributing factors included Cheese’s mental health issues and a failing relationship.

However, the coroner, Peter Bedford, described the behaviour of some of Cheese’s colleagues at the Sytner-owned dealership as “unacceptable”.

The inquest heard from Cheese’s parents that he had been “over the moon” when he got the apprenticeship, but he soon started coming home bruised and with holes burned in his clothes. The coroner heard details of the abuse suffered, including when workmates locked Cheese in a cage, sprayed his trousers with a flammable liquid and set his clothes alight.

His line manager, Simon Wright, admitted being there and described it as a “prank”. He said: “We knew where to draw the line… it was not bullying.”

On another occasion, four men held Cheese down while a fifth punched his leg repeatedly, leaving him with a limp, and the inquest was told of a third time when the apprentice was taken on a test drive and made to walk back to the dealership.

ACAS, the independent employment advisory and conciliation service, defines bullying as “offensive, intimidating, malicious or insulting behaviour, an abuse or misuse of power through means that undermine, humiliate, denigrate or injure the recipient”.

David Taylor, senior policy analyst at ACAS, said many employers recognise that bullying is a serious problem, and anti-bullying policies are widespread in organisations across the UK.

“These offer a vital safety net when things go wrong, but policies can only take you so far,” he said. “If people don’t trust that the problem will be taken seriously, they’re less likely to flag up bullying behaviour, even where an anti-bullying policy is in place.”

The inquest was told Cheese’s parents met his boss, Terry Kindeleit, to discuss the abuse, but Cheese later said he didn’t want to make a formal complaint.

Kindeleit concluded Cheese had made it up, according to a transcript of his interview with Thames Valley Police handed to the inquest.

Following the suicide, Sytner and Audi UK have taken steps to improve conditions at the dealership, including bringing in mental health charity MIND to run a management course, and weekly employee appraisals to improve the conduct of managers and supervisors.

ACAS recommends developing a sense of collective responsibility for the way people treat each other at work, with leaders setting the right tone and line managers encouraging their staff to talk openly about how they feel. Larger employers might also adopt an employee assistance programme – typically an outsourced free helpline that lets staff talk to an independent specialist in times of stress, ill health or bereavement.

“Increasing awareness of how we treat each other at work should get more people talking openly about what feels fair, but this is not necessarily an easy thing to achieve in practice,” added Taylor.

Poor job design, work intensification, stress, job insecurity and cultures of self-interest have all been identified as organisational factors that can create a climate conducive to ill-treatment and bullying, according to ACAS. What may start as low-level rudeness or disrespect can, if unchecked, contribute to the emergence of a culture that tacitly accepts bullying.

The advisory service also pointed out that employees can be exposed to bullying and ill treatment from customers, and employers have a duty to protect staff.

AM knows one AM100 dealer group that has banned a small number of ‘difficult’ customers from its businesses. Its chief executive told AM that a customer who acts so badly as to bring a staff member to tears is “a customer who can go elsewhere”. He intervenes personally to ban such customers if necessary, and to ensure the employee is able to step out of the situation and receive support.

Although Audi UK and Sytner Group were found to be free of blame by the inquest, they said they will review its full written findings.

Books on bullying
Bully In Sight: How to predict, resist, challenge and combat workplace bullying, authored by Tim Field.

Training and awareness
MIND, the mental health charity, offers training and consultancy for businesses to promote mental wellbeing in the organisation and to raise awareness and understanding of mental health. www.mind.org.uk/workplace/training-consultancy/