Removal of fees may expose car dealers to more tribunals 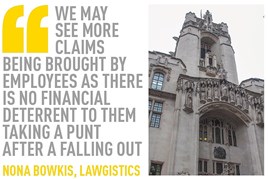 Over the summer, the Supreme Court ruled that the Government’s introduction of fees for industrial tribunals was unlawful. The fees – requiring complainants to pay up to £1,200 to bring a case – were introduced in 2013, with the aim of reducing the number of malicious and weak cases. It certainly had an impact – 79% fewer cases were brought over the following three years.

However, for employees who feel discriminated against or unfairly treated, the fees have been seen as a barrier to justice. The Supreme Court found that the fees were set so high that they restricted people from enforcing their employment rights and discriminated against women and those with particular characteristics.

“Employers are going to have to think very carefully before taking actions which may leave them open to potential claims,” said Emma Tegerdine, associate and employment specialist at Cleggs Solicitors.

Since the July ruling, disgruntled employees who feel mistreated by their employers are likely to bring a claim, whether or not there is a legal basis underpinning it. A compulsory pre-action conciliation procedure still remains, in order to reduce the number of cases that go to tribunal, but parties can refuse to take part in it.

“The bottom line is that we may see more claims brought by employees as there is no financial deterrent to them taking a punt after a falling out,” said Nona Bowkis, solicitor at Lawgistics.

Camille Renaudon, a partner and employment specialist at Hibberts Solicitors, said motor retailers should consider the potential benefit of auditing their records to identify examples of “high-risk” dismissals during the period when fees were payable.

Businesses should assess the potential numbers of historic claims that could now be brought by claimants, she said, and their records should indicate whether those are claims that were referred to the Acas early conciliation scheme, or not. If they were, those claims are more likely to now be revived, for a number of reasons.

“One key aspect employers should consider is how strong a position they will be in to defend such claims, should they materialise,” she said.

HR teams must consider if records and documents have been kept, and whether relevant witnesses are still able to assist, if necessary.

It is expected that potential claimants who were put off by the fees may be allowed to submit a claim ‘out of time’. Workers usually have a three-month time limit from the unlawful act. However, tribunals may decide that it is “just and equitable” to extend that limit.

Dealers can take action in advance, however. Peter Done, managing director of law firm Peninsula, said: “Employers need to ensure they are not only taking legal advice at tribunal, but are also taking steps to prevent them being taken to tribunal initially. Providing the right documents, having policies in place and following correct practices will reduce the likelihood of facing a claim.

“The reputational damage of ending up in front of an employment tribunal has become greater due to the introduction of decisions being published online. This lets anyone view the decision and the scrutiny of business practices normally carried out by a tribunal. Taking steps to prevent unlawful treatment in the business will reduce the many risks of going before a tribunal.”

One positive aspect of the ruling is that dealers who have been taken to tribunal since 2013 will be able to recover sums incurred if they had been ordered to repay fees to a claimant, because those claimants should not have had to pay fees in the first place.

Ministry of Justice figures show that during the first half of 2017 more than 30,000 cases were brought under the Working Time Directive – 12,038 claimed unfair dismissal, and 10,467 for equal pay.

ACAS, the conciliation service, has an ACAS Model Workplace tool, which employers can use to check how good their organisation is at people management and to gain guidance on
maintaining good employment relations.

HM Courts & Tribunal Service has a guide for employers in receipt of a claim to an employment tribunal. It includes a summary of the process and information on how the company should respond.

Cases, and the tribunal’s findings, are now available for anyone to search and read, including the reasons for the findings.