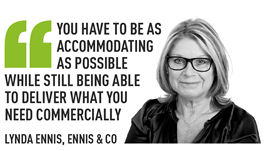 The automotive retail sector is making progress on tackling the barriers to boost diversity and inclusion (D&I), but more needs to be done to highlight the good being done by those in the industry moving in the right direction.

According to Lynda Ennis, the founder of executive search specialists Ennis & Co, leading industry retailers have stepped up to tackle issues around pay structures and job flexibility.

Ennis & Co was a joint stakeholder with Auto Trader for the ‘Making Diversity and Inclusion a Business Reality’ report. The report, in its second year in 2019, interviewed about 100 HR directors, chief executives and managing directors to track progress on D&I.

Ennis said: “There are a number of retail groups, like TrustFord, Sytner Group, Marshall Motor Holdings and Jardine Motors Group, that have already looked at pay levels and working flexibility with job sharing and done something about it.

“We know the automotive retail business is very demanding and is moving 365 days of the year with a lot of pressure on delivering volume. But in the last two years since we’ve been looking at this topic, there has definitely been progress.”

Respondents to the survey showed that training and development (36%) and having a strategy that focuses on having a diverse and inclusive workforce (33%) were generating the biggest benefit for businesses, while flexible working and the pay gap were each cited by 9% of respondents.

Overall, organisations that were surveyed largely showed a positive commitment to modernising ways of working, with 56% claiming to offer flexibility in working arrangements, 36% redefining how teams work and 29% have begun developing a business case for better work/life balance.

While progress is being made, one in five (22%) organisations said they believed they have not made any progress in these areas.

Kira Trehan, Birmingham Business School professor of leadership and enterprise development, said that while areas such as pay and flexibility are important, she believes looking at the development opportunities and recruitment practices in the first place is where the industry really needs to start.

“This isn’t just limited to the automotive industry, but there is a tendency to recruit ‘like me’ and not to expand beyond the norm,” she said.

“One of the biggest barriers is walking into a business and not seeing people like yourself already represented.”

Trehan said businesses will often defend their position by saying that not enough women, ethnic minorities or disabled candidates come forward or get through the recruitment pipeline. However, she said this should be taken as feedback that a company’s recruitment strategy needs to change.

She said: “You need to become more visible. Whether that’s engaging with schools, local networks or local business communities.

“There may already be people in your organisation that you should be making much more visible.”

Ennis said companies such as Cox Automotive and Addison Lee have been encouraging things such as employees being able to attend children’s sports days, accommodating time off to care for sick loved ones, or changing work schedules to accommodate the school run.

Some companies have added conference call capabilities to every meeting, so there isn’t pressure to attend physically as long as it’s possible to dial in with voice or video.

Ennis said: “You have to be as accommodating as possible while still being able to deliver what you need commercially.

“This includes increasing basic pay levels and being much more open-minded around areas like job sharing and recruiting based on skill, rather than job role.”

Trehan said some businesses are being quite strict with targets to make sure there is progress on D&I. Some of these companies are even linking these “leadership targets” to their bonus.

Trehan said: “If they’re not linked to targets then they become ‘nice to haves’, rather than things that actually happen.”

Trehan said making a business more inclusive doesn’t mean “flipping everything upside down”, but there may be some structural peculiarities that need to work to make things more accessible to a wider group of people.

She said: “How are the working hours put together and how embedded are you in a particular approach?”

Ennis said whatever retailers do, it cannot be a tick-box exercise and D&I cannot be solved in one jump.

She said dealer groups should look to access the biggest problem areas in a controlled and gradual way.

“I would say progress on D&I is more of a marathon than a sprint, yet it is much more intricate than this. I’d liken it to more of a triathlon; where there are multiple areas that all need to be worked on separately to align. It’s more about the journey, the pace and the finish than simply bolting over the hurdles.”