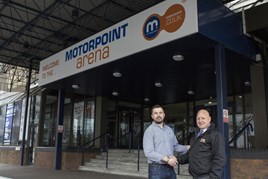 Motorpoint will continue to have its name featured on Cardiff’s 7,500 capacity Motorpoint Arena Cardiff after extending its naming rights deal on the venue for another five years.

The used car supermarket operator, which has a nine-acre site in Newport, will continue to drive awareness of its business across South Wales through the agreement which will include a complete re-branding of the building in the heart of Cardiff city centre.

New LED signage will be added to the towers of the arena which is managed by Live Nation and plays host to over half a million people each year.

“We’re looking forward to carrying on working with Phil Sheeran and his team at the Motorpoint Arena Cardiff and helping deliver an unforgettable experience for the one million plus who come through the venues doors every year.”

Phil Sheeran, general manager of Motorpoint Arena Cardiff, said: “We are absolutely delighted that Motorpoint has extended its partnership for a further five years and look forward to working together to ensure the Arena remains at the forefront of South Wales’ live entertainment scene.”