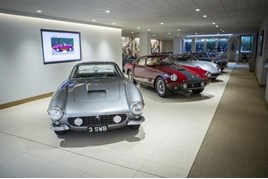 JD Classics has announced its international expansion through a partnership with Morris and Welford in the US.

The collaboration will see a new premier classic and sports car dealership open in Newport Beach, California, next month.

Miles Morris and Malcolm Welford have over 50 years of combined service in the classic car world, and they established Morris & Welford LLC classic car brokerage in 2003.

JD Classics’ founder Derek Hood said: “Miles and Malcolm are highly respected professionals in the classic car business. They are passionate about the cars, trusted by their clients and they both believe in delivering the highest level of quality. These traits are entirely consistent with the values JD Classics holds dear and I am delighted we have been able to join together in this new venture in Newport Beach.”

The team have brought together an initial collection of fine classic and sports cars, assembled from round the world, at the new dealership will be located at 4040 Campus Drive, Newport Beach, California 92660.

In an interview with AM earlier this year Hood revealed his plans to expand JD Classics following investment in September 2016, which saw Charme Capital Partners acquired a majority stake in the business.

The private equity firm said at the time that it had “identified a number of compelling opportunities to accelerate the company’s international growth in the large, liquid market for classic cars across the US, Europe, Asia and the Middle East”.

Hood revealed JD Classics' plans for California and said that he expects it to open an outlet in the Middle East next year.

“California has been in the works for a while now and it’s a natural progression for us,” he said.

“We have been going to Pebble Beach for the last seven years and I noticed straight away there are very few people in the US that offer what we can under one roof. The model we have created works and we will replicate it in California and then the Middle East.”