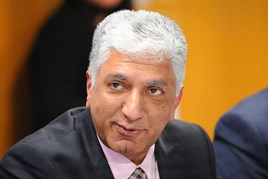 Independent car dealers are being urged to join a new ‘not for profit’ association formed to represent their interests when dealing with suppliers, politicians and industry leaders.

The Independent Motor Dealers Association was officially launched this week and aims to deliver greater leverage to businesses of all sizes, promising “one voice” to represent members’ opinions “for the good of all”.

But while its founder members admit that Auto Trader forms the main outlay of most businesses in the sector, they insist the group has not been set up purely to “bash Auto Trader” as it aims to address members' concerns on a number of issues.

Umesh Samani, a founder member and the owner of Stoke-based Specialist Cars, said: “The reality is Auto Trader aren’t looking after us and the upshot is that many independent dealers are falling by the wayside as a result.

“We haven’t set the association up to bash Auto Trader but certainly we can put an argument to them.”

It will be run on a ‘not for profit’ footing, a resolution voted for by all of the founding members early on in the discussions.

Since forming, largely via social media, three weeks ago, 500 dealers have pledged their support to the association.

Bilsborough, the owner of Crewe-based Cheshire Cars, told AM: “The support for the association has been phenomenal. We’ve had contact from AM100 top six PLCs who have been really supportive of what we’re doing. Obviously they can’t be members, but it’s good to build those relationships.

“For too long the independent retailer’s voice hasn’t been heard. Our aim is to ensure that we have the clout to fight the corner of people who run their own businesses and deserve a say.

“There are seven of us. We are all independent retailers. We answer the phone, respond to customer complaints, deal with suppliers. You don’t get that breadth of contact with the business in a large franchised group. I think we’re in a great position to comment on industry issues and make a real impact where it counts.”

Samani said that practical considerations would be at the heart of the IMRA’s areas of concern, with auction fees and the DVLA’s trade plate laws in its sights.

He added: “Too often the independent dealer has been taken for granted, forgotten about. We can help change that.”

Independents could benefit from vehicle recalls

Independents could benefit from vehicle recalls