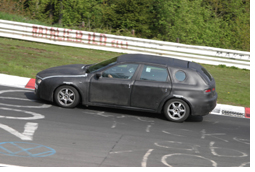 Alfa Romeo’s 156 Sportwagon is to get the same facelift as the sedan – and an Audi Allroad-style all-wheel drive crossover version called, somewhat unimaginatively, the Crosswagon.

The Crosswagon, due to reach Alfa showrooms in the second half of this year, will feature a raised ride height – up six centimetres – and a rear-biased four- wheel drive system, plus stability and traction control systems. Sole powertrain at launch will be the 150bhp 1.9-litre JTD Multijet diesel mated to a six -speed manual transmission. The engine management system has been recalibrated to increase power and torque at lower engine speeds. Exterior modifications will include aluminium accents and roof bars.

The facelifted 156 will be on sale barely two years before it is replaced by the all-new Alfa 157. The car will be built on the Fiat/GM premium platform that was originally intended to underpin future Lancia, Saab and Cadillac models – as well as niche vehicles for Fiat and Opel – but will now probably be mainly used for Alfas.

Fiat is banking on the 157 range achieving double the sales volumes of the 156 – approximately 250,000 units a year – to offset the investment cost of the platform. The Sportwagon replacement is expected to come in front-drive, four-wheel drive and high performance GTA trim. Active damping, variable rate steering and electro-hydraulic brakes are rumoured.

The 157 will be powered by a range of GM sourced petrol engines, and Fiat and Isuzu diesels. Base engines are likely to be based on the new GM 1.9 and 2.2-litre direct injection petrol fours fitted with Alfa-developed Twin Spark cylinder heads.