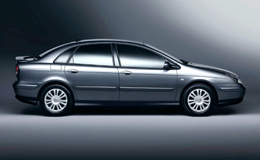 Exclusive has an alarm and Xenon headlamps, while the Exclusive SE gains park-distance control, an electric sunroof and electrically-folding door mirrors. Estates arrived in May 2002 and VTR trim was added in February 2003, as LX but with 16-inch alloy wheels, carbon fibre effect interior trim and special upholstery.

DRIVING AND PERFORMANCE
The handling isn’t up to Mondeo or Passat standards, but it’s safe, secure and bodyroll is kept in check.

COMFORT
A cushy ride is a Citroen speciality and C5 benefits from the firm’s unique Hydractive suspension, which provides relaxed long-distance cruising.

The seats are well cushioned and there’s enough room in the back for two adults or three children to sit comfortably. Estates have one of the largest load areas in the class and as a result command higher prices on the used market.

ENGINES
C5’s range of modern, punchy and economical diesel engines almost make the petrol line up redundant. But they are pricier, commanding a premium of 15-25%.

SAFETY
A four-star Euro NCAP was awarded in 2001, but this is now starting to look ordinary against class-leading five-star models like the Renault Laguna, Toyota Avensis, Mercedes-Benz C-class and Saab 9-3.

All models have remote central locking, while models from VTR upwards add an alarm.