Was this article useful?
Click the thumbs up >
Of course the industry is interested in Centrica’s £1.75bn sale of the AA – it’s the biggest automotive news story of its kind since Ford sold Kwik-Fit.

Business analysts have been talking their heads off since the City got a sniff that something was up and industrial correspondents have been scribbling away possessed over the implications of the motoring services organisation’s future under the ownership of the private equity groups CVC Capital Partners and Permira.

The press has been full of it: Tim Parker stands down as chief executive of CVC’s Kwik-Fit to become the AA’s new chief executive; Kwik-Fit chairman Sir Trevor Chinn takes the chair beside him; and together they’ll be floating within five years.

There are many different angles and several lines of speculation, but there’s one media thread that strings together the news coverage on an organisation that includes in its portfolio an enormously high-tech recovery arm and a sophisticated financial services division.

You got it: to illustrate these meaty tales there are images of the AA from the golden age of motorcycle combinations, salutes, and overheated Rileys (The Guardian, The Financial Times, The Times).

That’s obviously what readers want, so rather than mugshots of Parker and Chinn we’ve found a nice early 1960s photograph of a couple doing something in an AA emergency callbox. We reckon that’s a Humber Super Snipe in the background. 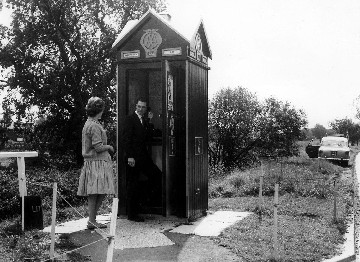 AM Poll
Will new car supply be restored to normal levels in 2022? Please leave a comment
Vote
View all
2887