Spyshot: Standalone B in a class of its own 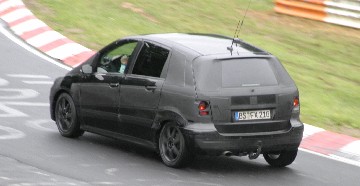 The new A-class’ big brother has hit the Nurburgring for shakedown tests, as Mercedes-Benz prepares for the five-door hatch’s launch in January. This car is more than just a long-wheelbase version of the A-class, as its standalone model name – B-class – suggests.

Mercedes originally conceived the B-class as a compact 4x4. However, the concept evolved into this rear-drive ‘Compact Sports Tourer’, a shrunken version of the forthcoming R-class MPV.

Some rugged design cues remain to spell out the differences from A to B: a higher bonnet line and bigger, pentagonal grille, while the disguised headlamp graphics more resemble an edgy update of today’s S-class lights than the slitty A-class’s. Common cues include flared wheelarches and Merc’s new trademark slash along the body.

Under the skin, the B-class adopts a stretched version of the A-class’s overhauled, stiffer sandwich platform, with tilted engine position to channel the lump under the floor in a crash, not into the cabin.

A new rear axle is claimed to boost grip and improve ride quality over the LWB A-class, assisted by adaptive damping which majors on comfort or sportiness depending on the driving conditions. Bigger brakes, speed-sensitive electric power steering, new-generation ESP and up to eight airbags also figure.

Due to be launched in the UK in mid-2005, prices will start at around £15,500. Inside, the B-class promises more rear space than a C-class. High quality materials reflect Merc’s refocus on quality; gadgets include DVD navigation and wheel-mounted controls.