Was this article useful?
Click the thumbs up >
Mercedes-Benz will be revealing its Vision Sports Tourer concepts ‘R’ and ‘B’ at the Paris Motor Show this month.

The Sports Tourers will be equipped with high-torque CDI diesel engines. In the Grand Sports Tourer ‘Vision R’ a new V6 power unit will be fitted, producing 218bhp.

The Grand Sports Tourer ‘Vision R’, which Mercedes-Benz is presenting in its European version in Paris, is designed as a 4+2-seater.

The Compact Sports Tourer ‘Vision B’ has its engine and transmission partly in front of and partly beneath the passenger area, which Mercedes says ‘gives this all-new touring car the interior spaciousness of larger saloons and estates despite its compact external dimensions’.

The compact Sports Tourer is powered by a new four-cylinder diesel engine with an output of 140bhp. Other attributes are a fuel consumption of over 47mpg and exhaust emissions at EU IV levels. A diesel particulate filter is also included. 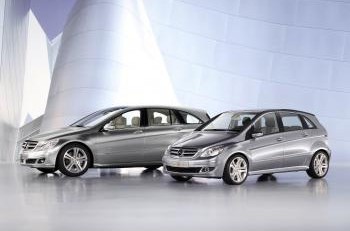