Hummer’s ‘H’ is on its way over

Was this article useful?
Click the thumbs up >
The controversial showroom design used by the Hummer muscle-sports utility vehicle brand in America will cross the Atlantic and is likely to feature in the UK.

Company bosses confirmed to AM that the ‘Authentic Hummer Centers’ are an important part of what the brand stands for.

Ray Schmit, the recently appointed European director, says: “They’re a way to communicate that Hummer is unique and different. But we don’t always get everything the way we want it, we know that, and there are planning codes to abide by.”

Many residents in US towns reacted angrily when the GM-owned firm tried to open the showrooms, which feature a long convex roof and huge H-badge on the front.

Several didn’t get the planning permission that was needed because of their imposing nature.

“There would only be one or two dealerships in the UK, and it will all depend on where we try to put the buildings,” Schmit admits. “If somewhere has a unique architecture we will have problems, but we will work with what we have to be selling in the right place.”

Pendragon, which imports Cadillac/Corvette for GM, is believed to be the preferred choice to take on the Hummer franchise in the UK.

Hummer will launch its smallest SUV, the H3, in Britain early in 2007. It will be right-hand drive and feature both petrol and diesel engines. 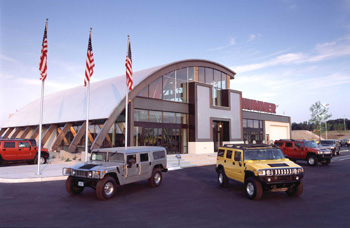