Was this article useful?
Click the thumbs up >
Lexus has announced details for its new IS sports saloon, which goes on sale on Saturday.

Priced from £22,400, the new model is fitted with a new 204bhp 2.5 V6 direct injection petrol engine and Lexus’s first diesel engine. The 175bhp 2.2-litre diesel unit will be available in January.

A new six-speed manual transmission is fitted as standard, with a newly-developed six-speed automatic available as a £1,000 option on the IS 250.

All IS models are equipped as standard with eight airbags, including knee airbags for the driver and front passenger. The passenger front airbag is the first in the world to use a twin-chamber construction.

The IS 250 SE-L automatic is available with the option of adaptive cruise control (ACC), which maintains a safe, pre-set distance from the vehicle ahead, and Lexus’s pre-crash safety system (PCS), which determines when a frontal collision is unavoidable and tensions the front seatbelts and prepares to engage emergency braking to help minimise impact. 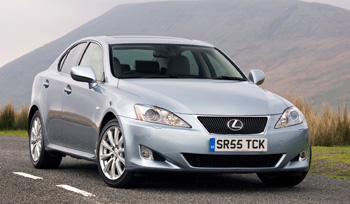 SE-L and Sport versions are equipped with high intensity discharge (HID) headlamps with Lexus’s adaptive front-lighting System (AFS). AFS adjusts the angle of the headlamp beam in line with vehicle speed and steering angle to improve illumination through bends.