Was this article useful?
Click the thumbs up >
A survey has revealed which cars are most unreliable for British motorists, costing them a total of £677 million a year.

Warranty Direct said the most unreliable car was the Renault Espace, with a 71% failure rate.

The survey, by Warranty Direct, has been criticised by the Society of Motor Manufacturers and Traders for not providing enough evidence to support its findings.

Sharing the second worst position was the Jeep Cherokee and Saab’s 9-5 executive model, both with 55 failures in every 100 vehicles; they were closely followed by the Ford Galaxy and Volvo C70 with 54 breakdowns each.

The Swindon-built Honda Civic was the most reliable car in the survey with six failures for every 100 vehicles. Two more Japanese models – the Mazda MX-5 (7%) and Nissan Micra (8%) were just behind.

The warranty company based its research on more than 26,000 vehicles built between 2000 and 2002 (W to 02 registration plate). It also said a minimum of 100 examples were used for each model.

"These are real cars, real claims and genuine bills. They are the statistics that really count when you weigh up what used car to buy," said Duncan McClure Fisher of Warranty Direct.

"It is hard to recommend a vehicle to someone when 70% of owners have had to have remedial work done to it over the past year.

"The fact that nearly half of the 80 models we analysed will break down more than the national average simply isn’t good enough," said McClure Fisher.

But the SMMT said that despite repeated requests Warranty Direct would not publish sample sizes and methodology to support the survey, throwing the validity of its results into question.

“That's why our members have asked for more detail than the limited information in today's press release. The statement makes it very difficult for the industry to take the results seriously. 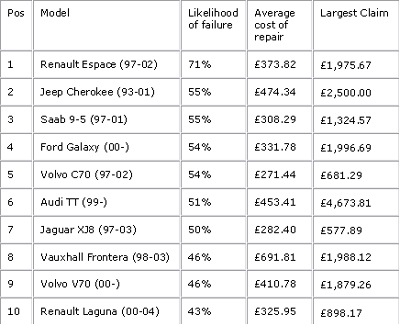 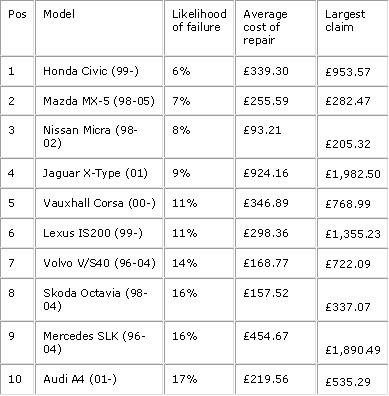