Was this article useful?
Click the thumbs up >
The domination of the diesel market is still on the rise with record growth at 42.2%.

Although diesel registrations were up, overall they fell 7.9% in November to 158,474 units.

Company car buyers are taking advantage of the 3% tax waiver before the January 1 deadline.

The Ford's Focus remained the UK's best seller in November, although Vauxhall's Astra was a close second. Lower medium cars showed the best year-to-date growth, up by 4.3%.

“As Gordon Brown commented yesterday, 2005 has been a tough year, especially for the new car market,” said the Society of Motor Manufacturers and Traders chief executive Christopher Macgowan.

“However, despite a weaker market, diesel registrations continue to rise. We had forecast a spike in diesel registrations as company car buyers rush to beat the end of the 3% surcharge waiver. As we enter the final month of the year, it will be interesting to see if this month's spike gets bigger.” 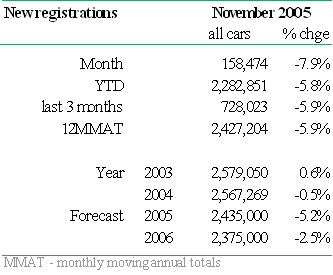