Was this article useful?
Click the thumbs up >
These Range Rovers may not look unusual, but they are harbouring a big secret under the bonnet: Premier Automotive Group’s first V8 diesel.

The Range Rover will be available with the hi-tech lump in September 2006, followed by the Sport.

Durability testing is underway on the common rail unit, engineered at Ford’s diesel centre in Dagenham. The bent-eight is derived from the 2.7-litre V6 diesel, employed across the Jaguar and Land Rover ranges.

Displacement is said to be 3.6 litres, with twin turbos ensuring the engine punches well above its capacity. Final outputs are expected to be close to 300bhp and well over 600Nm of torque – that’s 450lb ft.

With its hefty mid-range grunt, the V8 diesel will beat its 302bhp petrol sibling’s in-gear time between 30 and 50mph. Yet the diesel is expected to return around 25mpg on the combined cycle – almost 7mpg better than the petrol and the same as the outgoing TD6.

Land Rover will drop the BMW-sourced 3.0-litre diesel six from the Range Rover line up, with the V8 being the only derv option. Expect it to cost around £55,000.

In the Range Rover Sport, the 2.7-litre V6 diesel will remain the entry model, supplemented by the V8 oilburner, costing north of £40,000.

Expect the V8 to be put into other PAG brands, most likely the next-generation Jaguar XJ.

Power
Peak outputs should be in the region of 300bhp and 450lb ft of torque.

Chassis
A six-speed ZF auto ’box and a centre differential transmits the torque to all four wheels. 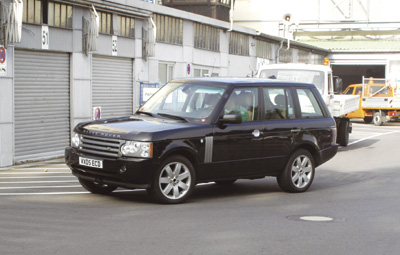