Was this article useful?
Click the thumbs up >
This is the first picture what the latest MG could look like.

The car, codenamed X60, is the replacement for the mid-range MG ZS that the company hopes to bring to the market next year as part of its joint venture with Chinese carmaker Shanghai Automotive Industry Corporation. 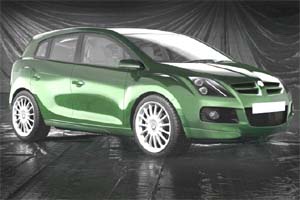 The new ZS is expected to arrive in dealerships in Britain towards the end of next year and will be available in both three and five-door form.

It is expected that power for the new cars will come from the existing MG line-up using the company's own K Series engine - a choice of 1.8-litre petrol engine, 2.0-litre diesel or the 2.5-litre V6.

The inside of the MG will have a sporty interior with bucket seats, a leather steering wheel and carbon fibre dashboard inserts. The Rover version, code named RD60, will have leather upholstery and wooden trim.

MG Rover has refused to comment on the pictures, which appear in the current issue of Auto Express, and will not release any of its own.

The X60 could make its debut at the British Motor Show next year at London’s ExCel exhibition centre in Docklands.

The car is now undergoing hot-weather assessment in the Australian Outback.