Was this article useful?
Click the thumbs up >
General Motors has filed a lawsuit against Chery Automobile Company - formally owned by Shanghai Automotive Industry Corporation - for copying its Daewoo Matiz/Chevrolet Spark model.

The lawsuit was accepted by a Bei jing court yesterday. GM is asking for damages of $9.6m (£5.1m) in connection with Chery’s alleged infringement of the Matiz and Spark models’ design copyrights with the QQ mini.

Chery says it developed the QQ independently and has over 20 deisgn patents.

The Spark, based on the Matiz, is produced by GM’s Chinese joint venture with SAIC.

Zhang Qin, China’s vice-director of the state intellectual property office, says: "GM Daewoo failed to apply for a patent on its designs in China. Thus, the technology was not protected in China according to the law."

Chery's next generation of models, which are set to compete with GM and other brands in North American and European markets will be available in 2007. 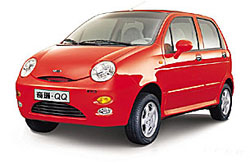