Was this article useful?
Click the thumbs up >
Renault has launched two new special editions of its Modus.

The Oasis and Maxim both come with air conditioning as standard and are available to order now.

Renault’s other Modus special edition, Maxim, is based on the Dynamique trim but has more than £1,100 worth of additional equipment. Available in a choice of six engines, three petrol and three diesel, prices for Modus Maxim start at £11,200 for the 1.4 16V 98 rising to £12,800 for the new engine Maxim dCi 106.

Modus Oasis offers the following standard features in addition to those featured on Expression, air conditioning, ‘Boot Chute’ double opening tailgate and Oasis ‘Kaleidoscope’ red upholstery. The ‘Boot Chute’ is a split-opening tailgate which can either be opened as a complete door as normal, or you can just open a section of the lower half which is hinged at the bottom to rest loads on if necessary. 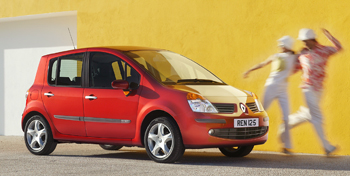 There is a choice of three option packs available which are Storage, Techno and Handling. The Modus Maxim has charcoal grey seat upholstery exclusive to this special edition and includes the following standard equipment over and above Dynamique worth £1,100: air conditioning, cruise control, speed limiter, 16 inch ‘Star’ alloy wheels and 60W single CD stereo.

Available with three petrol engines and three diesel, the Modus Maxim top of the range version is now powered by the more powerful dCi 106 IF Euro IV six-speed engine which develops 106bhp. The new engine offers a 0-62mph time of 11.2 seconds.

Prices for the New Modus Maxim are:

Customers also have the choice of four option packs available on Modus Maxim.