Was this article useful?
Click the thumbs up >
Stratstone Cadillac and Corvette has announced prices and engine choices for its new range of models, which will make their UK show debut at the Canary Wharf Motorexpo, which runs from 13-19 this month.

Both engines come with a five-speed automatic transmission as standard.

The Cadillac range for the UK also includes the SRX 4x4 (expected to be available in right-hand drive by the end of next year) and the XLR coupe/convertible, which is on sale now.

The new Corvette C6 will also be on view at the show. Available in both coupe and convertible form, it is fitted with a 6.0-litre V8 engine which develops 400bhp and is offered with either a six-speed manual or a six-speed automatic transmission. 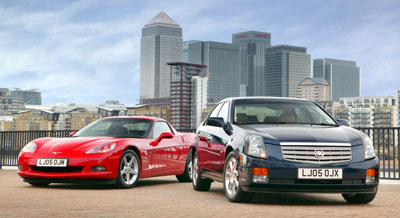 The Corvette C6 and the Cadillac CTS