Was this article useful?
Click the thumbs up >
For those looking for a value-for-money town car, there are few models better than the Seat Arosa. It shares its looks – and most parts – with the more expensive VW Lupo. It’s just as good to drive as its Teutonic cousin and it offers a wide choice of engines, with a funky-feel interior. 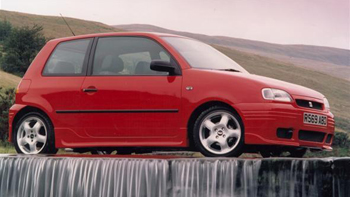 The hatchback handles confidently; it can be thrown round corners and has precise steering and a snappy gearchange. Because of its short wheelbase, the ride in town is harsh, while on the motorway Arosa wallows.

The seats in most models adjust for height – similar to larger Seats, which makes for a comfortable driving position. All switches and buttons have a ‘soft’ feel to them and controls are well weighted. Engine noise is a bit intrusive on the 1.0, but other engines do better and the cabin is well insulated against wind and road noise. The rear is cramped and will only really seat two children. It’s popular with couples, who can think of it a two-seater (this gives the front passenger more legroom). However, the tiny boot struggles to carry a couple of overnight bags, let alone the weekly shop; rear seats do fold for extra space. No clever cubbyholes or storage tricks.

The engine line-up is kicked off with a 50bhp 1.0-litre. It’s willing around town, but outclassed on the motorway. The three 1.4s (60 bhp and 100 bhp petrols and a 75 bhp turbodiesel) are competent in all areas and suit Arosa better. The 1.7 SDi is off the pace and gives no better mpg than the 1.4 TD.

Euro NCAP awarded the VW Lupo (which is built alongside the Arosa) four stars for crash safety, which puts it among the safest in its class. The Seat should perform similarly, but was not tested separately. Deadlocks and remote central locking are standard on most models.