Was this article useful?
Click the thumbs up >
Order books have opened for a hardcore version of the Renault Megane.

That’s £1,400 less than the regular 225 Sport Hatch fitted with the optional Cup pack, and 10kg lighter.

The new 2.0-litre, 225bhp model, badged Megane Renaultsport 225 Cup, is Renault’s latest spin on the 225 and Cup themes, aimed at customers willing to trade some ride comfort for a more focused driving experience.

Combining the weight reducing and tuned chassis elements of 225 and Cup, it shaves 0.2sec off the Sport Hatch’s 0-62mph acceleration time to 6.3sec. The Capsicum Red-only Renaultsport 225 Cup is not a car for customizers. “There are no options on the 225 Cup other than metallic paint,” says a Renault spokesman. Renault expects to sell around 500 units annually in the UK. 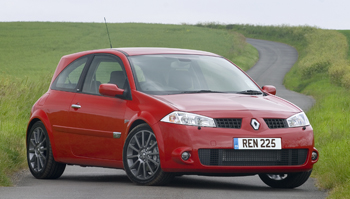