Was this article useful?
Click the thumbs up >
So far, 2005 has been a buyers’ rather than a sellers’ market for the used car sector, with new car offers putting pressure on residuals of nearly new vehicles. This is expected to continue through to the end of the year as retail demand wavers and new car incentives attract the attention of potential used car buyers over the next quarter.

However, the UK is still Europe’s largest used car market, selling 6.8m units. It also turns a greater percentage of its car parc than any other major market, underlining the efficient wholesale market in place.

It’s clear that the customer has the upper hand when it comes to finding their next used purchase and dealers increasingly have to work harder in order to attract buyers.

According to the 2005 BCA/Sewells Used Car Market Report, getting the best price is still the main consideration when motorists decide which particular car to buy, ahead of wanting a specific make or model. This is followed by the third reason – a specific dealer having the car they want.

Dealers sold 3.66m used cars in 2004, accounting for more than half (53.6%) of the used car market. But it was franchised dealers that led the way, selling 3.12m cars. A quarter of used car buyers stated that their desire for a specific model, or the fact that a particular dealer had the car they wanted, were the top reasons for buying from a franchised dealer.

Yet, according to the survey, less than half of used car customers have been contacted by the selling dealers to find out whether they are satisfied with their car and only a quarter of used car owners have been approached by their dealer to discuss buying another vehicle.

It’s clear that dealers are missing a huge opportunity. 42% of the survey’s respondents have bought a car in the past two years with 67% of buyers choosing a used car rather than a new one.

More tellingly, the main influences on which car to buy are owners’ personal experiences of a particular make or model, followed by the views of friends and family. Add to this a positive view of the buying process and a well-timed phone call to a satisfied customer could lead to further sales from their friends or family. And it does appear that the majority of buyers (a remarkable 94%) are satisfied with their vehicle, of which 71% are “very satisfied”. Only 3% say they are unhappy. 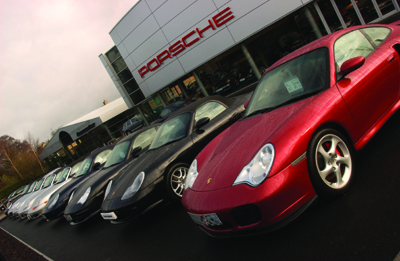 “Used car owners need to believe they have made the right choice of car, feel confident they have bought from the right used car dealer and feel very valued as a customer,” says Tom Madden, BCA’s director of customer affairs.

“It makes perfect sense, therefore, that franchised and non-franchised dealers should keep in regular touch with their customers to make sure they remain completely satisfied with both their car and the dealership.”

Dealers keep in touch with half of men they sold a car to, but just 41% of their female customers. Yet 69% of women car buyers decided to buy a used vehicle, compared to 65% of men. Unsurprisingly, buyers of more expensive cars get better treatment; three quarters of them receiving regular satisfaction calls.

“Everybody in the business knows the buyer is critical to success and any business that does not keep in touch with its customers must surely be missing opportunities,” comments Madden.

When it comes to deciding which used car dealer to buy from, getting the right car from a local dealer often clinches the deal. 46% chose a dealer because it had the right car at the right price while 34% based their decision on where they could get a good deal. The other main factor is the distance and convenience of a dealer.

For older buyers (55-plus) and wealthier buyers, dealing with friendly staff that are helpful and professional is an important issue. Warranty is a big advantage when buying more expensive used cars, while quick delivery is another key factor.

Wealthier buyers choosing cars costing more than £10,000 tend to thoroughly research their potential next car. Most seek hard evidence before deciding to buy, gleaned from personal experience such as a test drive along with research from consumer reports and motoring magazines.

Surprisingly though, newspaper and televisions advertising, used car displays, dealer advice and motoring programmes have little influence on what type of car motorists initially set out to find.

Instead, the internet is increasingly being employed to compare prices and also to buy cars. More than half of future car buyers say they will use the internet to help them find their next car. 60% of men and 43% of women buyers plan to start their search this way, as do more than 70% of younger people and those buying more expensive cars.

Used car buyers in the 17-24 age band are more heavily influenced by the opinions of friends and family, cited by 43% of younger respondents. Younger buyers also take much more notice of cars they see on the road along with newspapers and car-related TV shows compared to older car owners.

While new sales of small cars are falling, the hatchback’s share of the used car market edged up three points to 48% this year, while saloon models fell by 2% to 26%. Estate models accounted for 7%. However, it appears that the desire for 4x4 and MPV models has largely been restricted to the new car market, with off roaders only accounting for 4% and people carriers 5% of used sales.

“The market share for used 4x4 and MPV models has historically been quite small. When we first asked this question in 1998, 4x4 models represented 3% and MPVs just 1% of used car purchases. Bearing this in mind, both sectors have made quite considerable inroads with motorists in recent years, with the smaller MPVs being particularly attractive to used car buyers as a practical family car. With hatchbacks holding steady, it is the used saloon sector that appears to be slowly declining,” says Madden.

This demand for hatchbacks is being driven by younger buyers, proving most popular with the 17-24 year group, while two out of five 65-year-plus motorists prefer to buy saloons.

With price and value for money remaining the most compelling reasons for buying a used rather than a new car, the decrease in the price of vehicles over three years old is good news for buyers. 28% believe that used cars offer better value for money and further 23% think there is a lower depreciation with used cars. 35% of owners said they couldn’t afford a new car.

“As drivers get wooed by the aggressive new car deals, fewer will want to buy nearly new cars and so there will be further downward pressure in the nearly new arena,” says Rob Barr, group communications and planning director of Manheim.

“Dealers need to be aware that depreciation in all model segments is very different and so some cars represent better value to the retailer and the buyer than others.”

Manheim measures value as a percentage of cost new, so superminis at 47% of cost new don’t look as good a value as MPVs, which are 42% of cost new. Mileages also vary from sector to sector: executive dealers who normally like to keep their own brand used stock in franchise have got to be aware that mileages are creeping up in both the compact executive and executive sectors.

“With fewer lower mileage cars coming back in to the market, perhaps these type of dealers need to start reviewing their used car stocking policies,” adds Barr.

“This is why such cars as the BMW 1-series, Mini and Audi A3 have proved to be so popular,” says Kieren Puffett, editor of Parker’s.

“New cars are being offered at great prices, which means it’s true to say there has never been a better time to buy a new car. This in turn has put real pressure on nearly-new and used cars, which means there are some amazing bargains out there.”

However, according to Puffett, it’s not only the volume brands that have been hit by the squeeze in used prices.

“It is not just mainstream cars such as Mondeos and Vectras that can be bought at such low prices. Prestige cars such as BMW 3-series and even the new BMW 116i are being offered with serious reductions. Even 4x4s such as the Land Rover Freelander can be purchased with serious savings of several thousand of pounds,” he adds.

With the exception of medium-sized family cars, diesel vehicles are coming out of use earlier than their petrol counterparts by around six months on average. This appears to be because they have reached the mileage thresholds sooner.

While this isn’t surprising, it begs the questions are fleets setting the same age and mileage thresholds for petrol and diesel alike? If so, then should these be higher for diesel to get further longevity from these variants, rather than having to replace them earlier?

While there is a premium to pay for new diesel cars, it is currently rewarded handsomely at the back end and there certainly seems to be a case for looking closely at replacement policies.

According to the BCA/Sewells 2005 report, diesel are most popular among buyers 35-54 age bracket, a quarter of this group buying an oil burner but they are much less sought after by the over 65s. Diesels now account for 30% of used cars costing between £15,000 and £20,000 and make up 22% of total used sales – the main factor being fuel economy followed by engine longevity.

“The shift towards diesel-powered cars will undoubtedly gather speed as the much higher diesel volumes, entering the new car market in the last two or three years, feed through to the used market,” says Tom Madden, BCA’s director of customer affairs.