Was this article useful?
Click the thumbs up >
A chat room run by female entrepreneur Ling Valentine, has helped to make more than £1 million a month for her web based contract hire company LingsCars.com.

She says much of her success is based around her unique ‘sales patter’ conducted in her online chatroom from her house in Gateshead.

"I'm the first motor retailer to use live chat room technology to drive sales. Customers can type and chat in real time to ask questions about the cars I sell or talk to me. There are serious business benefits. In a chatroom I can chat to several people at once, whereas I can only make one phone call at a time. It also enables me to show pictures of the cars, discuss prices and make deals online," said Valentine.

Ling says she has sold over £10m worth of new cars on contract hire agreements. By undercutting the big car leasing companies by as much as 35% she has seen her fledgling business grow fourfold in the past year.

Ling is also the owner of a Chinese military truck, complete with a giant rocket, parked in a field by the A1 motorway. Thousands of people drive past it everyday and she says it has been a great marketing tool. "It's a genuine Chinese Nuclear Army vehicle. I imported it from Shanghai and built a dummy missile to go on to,” she said.

“I get texts, emails and phone calls from people every day who see it. I think it will become a landmark as iconic at the Angel of the North. I may even fix it with a webcam so that the whole world can see how great the North East people are." 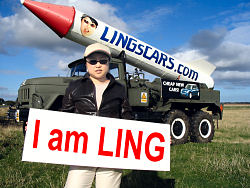