Was this article useful?
Click the thumbs up >
The reason for Lookers’ lengthy delay before making its play for Reg Vardy is now clear: the group wanted to raise sufficient capital to comprehensively tear apart Pendragon’s 800p per share offer. This it achieved by tabling an 875p bid (a cash offer of £492m compared to Pendragon’s £450m).

The question for Pendragon chief executive Trevor Finn now is whether he wishes to counter with an offer significantly higher than he was hoping to pay. The company says it is “considering its options”.

One of these is to pocket the £4.5m break fee Vardy agreed after recommending the original offer, plus an easy £7m profit from selling on to Lookers the 9.35m shares (16.6%) promised to it by chief executive Sir Peter Vardy under the call option.

Although Reg Vardy’s directors had irrevocably backed Pendragon’s 800p per share offer last month, they now say they will not vote against Lookers’ bid, and have recommended it to shareholders. Pendragon had secured 28.4% of shares at 800p (27.2% from Vardy directors); in turn, Lookers already has the backing of 28.5%. Its bid will be funded in full by the Royal Bank of Scotland.

Either offer will need approval by 75% of Vardy’s shareholders at an extraordinary general meeting, likely to be in March.

Lookers intends to keep Vardy’s senior management team in place, and hopes Sir Peter Vardy will stay with the business while it is integrated. It expects the deal, which would double the number of dealerships in its network to more than 200, to be immediately earnings enhancing.

Given Vardy’s record half-year revenue performance, combined Lookers-Vardy turnover would be just above £3bn, compared to Pendragon’s £3.5bn. This is dependent on Lookers getting the green light from Iveco Ford and Mercedes-Benz to take on the Reg Vardy showrooms – it presently does not hold these franchises.

One industry watcher says: “This is a new situation for Finn – previously every time he went for something he got it. Now he’s being challenged and it’ll be interesting to see if he is happy to be beaten by a smaller rival.”

Interim results for Reg Vardy announced last week show it is bucking the tough retail conditions in the car market, and has achieved growth in new and used cars.

The report reveals a 15.7% rise in turnover to £1.08bn in the first half of this financial year, while operating profit before amortization and exceptionals is up from £19.9m to £23.3m. Operating margins have also risen to 2.16% against 2.13% in the same period last year.

“The results for the period reflect a substantially improved contribution from the under-performing dealerships acquired for little or no goodwill in the last few years,” says John Standen, Reg Vardy chairman.

The group has relinquished its representation of Fiat and Alfa Romeo in Reading, Castleford and Leicester as a consequence of Fiat Auto UK’s declining market share. But Standen says it remains committed to its remaining six Fiat and five Alfa Romeo dealerships.

Rob Golding, independent auto industry analyst, says: “The results announcement, in the end, was remarkably neutral given that it was Sir Peter’s swansong and his chance to prise as high a price as possible from Lookers.

“The rise in shareholders funds of nearly 8% and 4% on the adjusted earnings per share – achieved in a period of decline year on year – were both enough to allow a higher bid. And it came.” 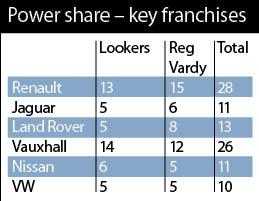