Was this article useful?
Click the thumbs up >
The launch of the IS last November sealed a successful year for Lexus GB, one in which it raised sales by 5%, topped the Sewells and RMI dealer attitude surveys and won the AM carmaker of the year title.

Consistency has been a byword for the company – consistent sales growth since Toyota launched the premium brand in the UK 16 years ago, consistently high performance in dealer and consumer surveys and a consistent retail network, with very little churn. That’s set to continue this year as the 53 centres start to reap the benefits of a policy that embraces pull rather than push sales tactics.

Dealers are looking at pulling in 16,000 new car buyers this year, a record-busting 51% increase over 2005’s 10,548. In a year where total UK sales are forecast to slip by almost 3%, is this an over-ambitious target? Lexus has a history of steady, not spectacular, growth, but GB director Steve Settle is confident he’s got his sums right.

Pushing into the corporate market

He points to a full year of IS sales, a doubling of hybrid volumes to 2,500 on the back of the RX400h, more diesel engines in the range and a drive into the corporate user-chooser market, though again based on a policy of customer pull, not a residuals-bothering manufacturer push.

“You will see a difference in the scale and mix this year. But we will not be offering big corporate discounts – we will trade on demand for our cars,” Settle says.

“This is a tipping year for Lexus and for our dealers who should see a twofold improvement in profits. I’d be surprised if most centres aren’t achieving 2% margins this year.”

He’s also confident profit per unit will increase because of the new cars, higher list prices and less need to offer discounts.

Lexus GB’s business model is built on its existing dealer network of 53 centres. It plans to add up to six more and says that by the end of the year its network will be “99.9% complete”.

Although Lexus raised sales last year, it narrowly missed its own budgeted target of 11,000, blamed on run-out of the IS. That schedule was devised by dealers during discussions with Lexus management, and saw stock purposely run out at the end of June, almost five months before the new car was launched.

“Residuals of that car have strengthened because we left such a long gap between old and new,” says Settle. “The downside was that we went through September without our entry car.”

He expects to see incremental annual increases with the next milestone in 2010. That’s when Lexus is scheduled to exceed 20,000 sales, averaging out at around 400 per dealer. To achieve that goal, retailers will need to take a close look at their businesses and staffing levels. For Settle, customer service is crucial and he puts it simply: “If we are to sell 60% more cars we will need 60% more staff at our dealers.”


Dealers are divided into regions

In addition to swelling the staffing ranks, dealers will need to ensure they have the capacity to handle higher throughout of service and repair business – by 2010 the Lexus car parc will have almost doubled from 65,000 to 120,000. For some that means new repair facilities. Presently 47% have dedicated aftersales operations; within five years 75% of the network will.

Some of these will be second phase developments as a result of dealers outgrowing their current facilities. Settle estimates around one-third of the network needs redeveloping or relocating.

He also points to the need for dealers to be more innovative in their approach towards used cars by incorporating new marketing ideas such as point of sale materials, plasma screens containing group stock and displaying representative sample cars in the showroom.

Retailers will also be expected to embrace the new Approved Pre-Owned used car programme, launched last month, which intends to give used car buyers the same experience as new. Dealers can access stock held centrally by Lexus, such as ex-contract cars, as soon as it becomes available, and are charged with raising volumes from 8,000 last year to around 14,000 this year.

“These cars need to be marketed in a different way because there is a lack of space on many forecourts,” Settle adds. “It means stocking less but selling more.”

With the launch of its used car programme, Lexus is playing a necessarily rapid game of catch-up with more established car companies. The aftermarket is also in its sights with the recent introduction of an incentives-based dealer scheme. The key here is customer absorption and loyalty and the focus is on staff development and retention.

“It’s not a margin hold-back scheme, it’s about the revenue dealers can earn by doing an excellent job in aftersales,” says Settle. “Aftersales is a core part of customer retention. At the moment our overall loyalty is in the early 30s; our aim is to achieve 50% by 2010, although I’d like to get there before that. For aftersales I want to raise loyalty from 45% to 55-60%.”

Following its launch into its Japanese homeland last year, Lexus is now a global brand, which has significant implications for UK retailers. The marque will receive greater investment that will lead to a larger number of model derivatives – such as estates and 4x4s – and a wider choice of engines. Settle says it will also mean a “smarter” product lifecycle.

“The old IS, for instance, was a seven-year-old car that had not seen much change. That helps to keep quality and reliability high because the manufacturing processes stay the same, but it can also mean a tail-off in customer interest,” he says.

“If we introduce new engines and small metal changes over the lifecycle it will freshen the range and give it a kick-start. We can expect more money to be invested in Lexus and that brings us greater opportunities.”

Lexus has been running its CCS (Complete Customer Satisfaction) for the past year, which links head office to every retailer. Forty-eight hours after every new car purchase, the customer is contacted by phone to assess their view of the experience. Three questions are crucial: Are you completely satisfied; would you recommend this centre; would you use this centre again. If the customer is not completely satisfied further questions pinpoint the grievance and a red flag appears on the central computer at Lexus GB head office.

“We get around 20 red flags a week, but most of them are dealt with by the centre. If it is serious enough I will pick up the phone to the customer myself,” says Settle. He has recently extended CCS to include used cars and is in the process of rolling it out for aftersales.

Some might see CCS as verging on a ‘Big Brother’ obsession, but Settle claims his retailers can see the benefit. “They love it because we have an open relationship. It’s not always the centre’s fault, it might be our fault,” he says. “The system is based on trust, respect and transparency. It’s not about apportioning blame; it’s about sorting out the problem.”

And, he adds: “We want to be seen as a true premium brand in the UK. Our unique selling proposition is not our heritage, it’s our customer experience.” #AM_ART_SPLIT# CV 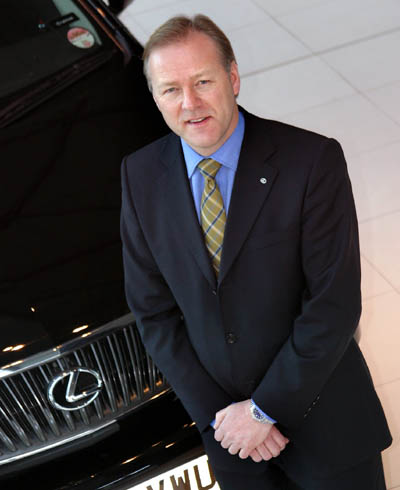 Lexus has enjoyed consistent growth, aside from a dip in 2002 due to changes in tax BiK (Lexus had no diesel to attract fleets). This year is budgeted as a new record of 16,000

Lexus will give the green light to this supercar, though it’s unlikely to hit UK showrooms much before 2007-8. It’s already undergoing extensive testing with a front-engined 5.0-litre V10 sending more than 500bhp through the rear wheels.

The chassis is hi-tech, lightweight materials such as carbon fibre, with a 50:50 weight distribution.

Unveiled at this month’s Detroit motor show, this fourth generation of Lexus’s flagship model goes on sale in November 2006. The new 4.6-litre V8 engine produces around 350bhp and is expected to take the car from 0-62mph in less than 5.5 seconds. It will also be available as a long-wheel base version.

#AM_ART_SPLIT# A new tier of marketing

Created last year, the Lexus Marketing Association (LMA) establishes middle tier marketing at a regional level and slots in between the national advertising carried out by the company and local promotions by individual dealers.

Lexus divided the retail network into four regions – north England/Scotland/Northern Ireland, Midlands, south-east and south-west. Dealers in each region meet four times a year to devise a quarterly marketing campaign that slots in with the national plan, for instance displaying cars at airports or at regional shows, posters or local sponsorship.

Dealers contribute to a central fund, which is matched by Lexus. The pot is divided between the regions, with amounts varying according to the size of the region in volume sales and cost of media, to generate local activity.

“It’s a more cost effective way of doing things – some of which individual dealers couldn’t afford to do,” says Steve Settle.

“It gives greater flavour and depth to our national campaigns and is based on our American model.”

The fund is presently spent on new car marketing but could be extended to incorporate used cars and aftersales.