Was this article useful?
Click the thumbs up >
Jeep is America’s Land Rover, so it’s inconceivable that it could build anything that can’t perform well off road. The Cherokee is no exception and is more able off-road than most owners will ever need.

The latest model is less boxy than its predecessor and more appealing to European tastes, but it lacks sophistication in the cabin. Used buyers will appreciate the fact that it depreciates quite quickly. Petrol models offer the biggest savings, but you will pay for it at the pumps with mpg in the low 20s.

Driving and performance
It’s at its best playing in the mud or with a horsebox hitched to the rear; Cherokee still takes some beating when the Tarmac runs out.

A 2.4-litre petrol engine is the runt of the litter with similar acceleration to the diesels while being almost as thirsty as the V6.

Comfort
Sit in a stationary Cherokee and it feels quite comfortable and roomy. On the move, the off-road biased suspension means it’s rather crude, with a ride that jolts over surface imperfections. Wind noise is considerable and it has a tendency to creak and rattle.

Safety
It’s sturdily built, and scores four stars in Euro NCAP tests from 2004 onwards. Prior to this it lacked a seatbelt warning alarm, so only achieved three stars. All models have driver and passenger airbags while Limited models also get curtain and side airbags. 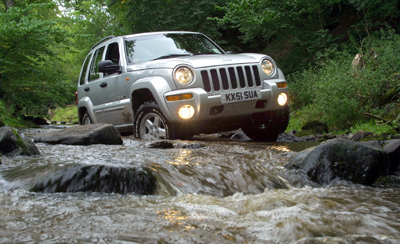 Fast movers
2.5CRD
Offers the least thirsty option and is the preferred choice among those who tow.
0151-0505 £7,990-17,875
Limited models
The top-spec Limited is very well equipped. With a diesel engine it’s the dream combination.

One to avoid
3.7 V6
It’s a fine engine and great for off-roading, but too thirsty for most buyers.

In the workshop
Jeeps tend to be mechanically tough but there have been problems with the automatic gearbox.