Was this article useful?
Click the thumbs up >
Sales of nearly new cars, under the age of one year old, dropped significantly during the second quarter of 2006.

Rob Whalley, managing director Experian’s Automotive division, said: “The impact of falling new cars sales since 2003 is finally manifesting itself in the used car market. In previous years, the industry had been seeing a boom in the sale of nearly new cars as consumers took advantage of virtually new quality at significantly less cost and depreciation. The boom could also have been attributed to the increasing number of used car programmes, which encouraged the sale of these high quality younger cars.

“However, sales of such cars have begun to fall, because fewer new cars are transferring into the used car market and, as a result, demand for nearly new cars has increased. This, in turn, is forcing residual prices for these newer used cars to go up and may have deterred buyers looking for a bargain. It could also be the reason that cars aged between six and nine years old were the only ones to increase sales.

One to three year old cars have also experienced a five per cent drop in sales in quarter two 2006 compared to the same quarter last year – the first fall in this quarter for six years. Year-on-year, the period April to June had been seeing sales of cars in this age group increasing since 2000, although the increase in the number of cars in this age group sold during quarter two 2005 was significantly smaller than previous years.

Overall, used car sales during this quarter, irrespective of year, had been increasing year-on-year. This is the first year since 2000 that the industry has seen sales drop (3.4 per cent) for this quarter compared to the same quarter in previous years. New cars sales continued to drop during this quarter.

In terms of marque, sales of used Ford cars fell to their lowest point for this quarter since 1998, while sales of used Vauxhall cars fell to their lowest point since 2002. Rover, on the other hand, still comes out as the sixth highest selling used car marque and has actually seen an increase in sales since the last quarter. However, Rover used car sales fell year-on-year by more than any other marque in the second quarter of 2006. Ford saw the second highest fall in sales, after Rover, compared to the same quarter last year.

#AM_ART_SPLIT# Whalley added: “Marques that have been experiencing a consistent drop in new car sales will also start seeing the effect in their used car sales. Rover is the perfect example of how a lack of sales in the new car market eventually affects sales of used cars. With fewer cars going around it puts further pressure on dealers’ margins as cars become more expensive to buy.” 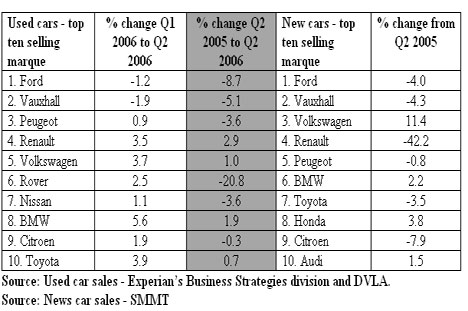