Was this article useful?
Click the thumbs up >
Vauxhall plans to give the Renaultsport Clio 197 a real fright with its new Corsa VXR.

Insiders say the flagship Corsa will have between 190 and 200bhp on tap, up there with the output of the iconic French hot hatch, and bigger models such as the Golf GTi and new Civic Type-R.

The Corsa runs an all-new turbocharged 1.6-litre four-cylinder engine. It sends power to the front wheels via a close ratio, six-speed manual gearbox.

It’s not just peak power that should have dealers rubbing their hands – it might be half decent to drive, too. The standard Corsa is a pretty nimble tool, and that’s before the VXR’s sports suspension is added. With its firmer spring and damper rates, the VXR may be too hardcore for some tastes – bang on the brand’s positioning.

The sporting flagship’s aggressive look has been outed at the Nürburgring test track. Deep side skirts give a Tarmac-hugging stance, with mesh inserts packing out the grilles. The front bumper is embellished by driving lamps; at the rear, twin slashes add a macho flourish; and the central exhaust is an eye-catching triangular shape.

The three-door VXR should land in showrooms in the spring, after its Geneva motor show premiere. Expect a price just north of £15,000.

Design
VXR stands out a mile, with its bulging bodykit, mesh grilles and triangular exhaust 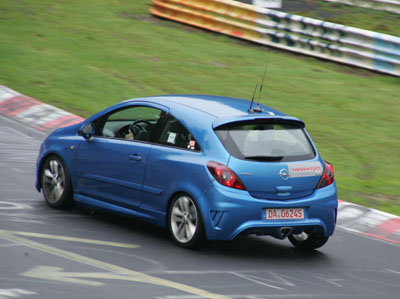