Even the Tokyo show concept’s boldest touches have survived on the production car. Blacked out pillars create a glasshouse like a motorcycle helmet’s visor; big brake cooling vents behind the front wheel-arches; vertical headlamps that melt into air scoops: all are present.

Couple in a wedgy shape and four Ferrari-style rear lamps echoed by quad big bore tailpipes and you have one of 2007’s most stunning cars.

Nissan’s supercar is wearing the GT-R badge to distance it from the Skyline saloon. The wheelbase, overhangs and height are bespoke, as is the hardware.

The GT-R is being developed in a high security pen deep within Nissan R&D. Leaks suggest the 2+2-seater uses an updated version of the 350Z’s FM platform, so named after its ‘front-midships’ engine position.

The R34’s straight-six is history, but Nissan’s 4.5-litre V8 won’t take its place for fear of nose-heavy handling. Sources hint that a bored out version of today’s 3.5-litre V6 will provide the grunt, breathed on by twin turbochargers fed by those bonnet scoops. Expect at least 500bhp.

Power will be continuously fed between all four wheels, and the suspension is likely to have active damping to offer a choice of ride and handling balance. Power should be transmitted by a six-speed manual, and probably a double-clutch ’box operated by wheel-mounted paddles. 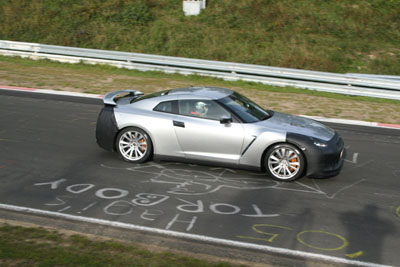 Design
Faithful to the 2005 Tokyo concept, with its angular sheet metal, slitty glasshouse and aero kit.