Porsche’s expansion drive will step up a gear with the Panamera, this four-seat coupé which will arrive in 2009.

The big coupé market is enjoying a renaissance, with the Mercedes CLS soon to be joined by a host of rivals.

Porsche is going it alone with its fourth model line, despite its close links with VW and the existing SUV joint-venture. The bespoke platform is front-engined/rear-drive, although four-wheel drive will be offered later to keep the marketing team happy.

The engines, pushed back in the nose to optimize dynamics, are upgraded versions of the petrol V8 and V10 from the Cayenne and Carrera GT supercar.

Transmission may be via a double clutch transmission, which Porsche developed for racing long before VW Group produced it.

As the prototype shows, the Panamera is instantly recognizable as a Porsche. The nose is inspired by the now-dead Carrera GT, the rear is stubby like a 911’s. A hatchback, and the long wheelbase to seat four, should make the Panamera a practical in-house alternative to the Cayenne SUV.

Expect the finished car to have a far sleeker glasshouse, and four conventional doors rather than any Mazda RX-8 style trickery.

Chassis: Bespoke platform, with the engines mounted in the nose unlike Porsche’s other sports cars.

Design: Sleek and sporting Porsche, with four doors and a hatchback rump. 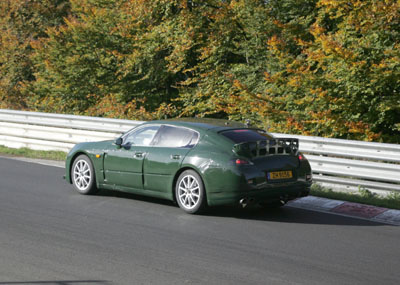