Was this article useful?
Click the thumbs up >
Volvo has produced a new safety system which could help cut low speed crashes by half.

The ‘City Safety’ system is active up to 20mph and keeps an eye on traffic up to six metres in front of the car with the help of an optical radar system.

“The system offers benefits to all involved. For the occupants of the car in front, the risk of whiplash injuries is avoided or reduced, plus it can help reduce or even eliminate the cost of repairs to both vehicles,” says Ingrid Skogsmo, director of the Volvo Cars Safety Centre.

The system runs a calculation 50 times per second to determine what braking speed is needed to avoid a collision based on the distance to the object in front and the car’s own speed. If the calculated braking force exceeds a given level without the driver responding, the danger of a collision is considered imminent and ‘City Safety’ helps avoid or reduce the consequences of a collision by automatically activating the car’s brakes and reducing the throttle.

The system works equally well day or night, but will be limited by fog, snow and heavy rain. However, if the sensor on the windscreen is obscured by dirt or snow the driver is alerted via the car’s information display.

Volvo expect the ‘City Safety’ system to be available within two years. 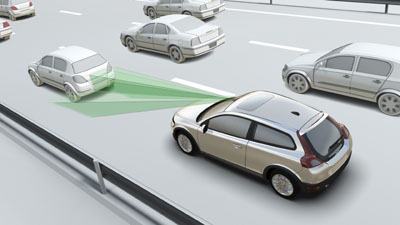