Was this article useful?
Click the thumbs up >
Kia’s first fully European offering has left productions lines in Slovakia.

Completed at a cost of €3 billion, the new 300-robot plant aims to produce 100 cars per employee per year within the next few years. A full shift pattern and 3,000 employees will see the plant producing a capacity of 300,000 vehicles per year by 2009.

The new five-door Cee’d will go on sale in the UK on February 1. Every model will come with a seven-year, 100,000-mile warranty as standard. 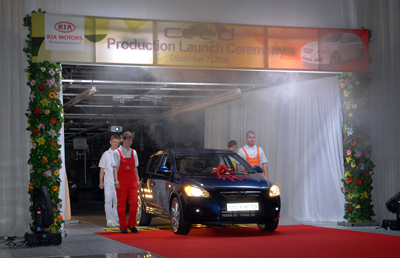