Was this article useful?
Click the thumbs up >
An all-new version of the Think electric city car, once part of Ford’s motoring vision, is to be re-launched in the UK next year.

London is one of two European cities being targeted in the initial sales programme, and bosses are currently working out the best way to offer the plastic two-seater.

Chief operating officer Richard Blundell told AM: “We are still exploring a number of options of how to sell the car, but we won’t pursue the traditional franchised dealership route. We don’t believe there is anyone suitable to promote and sell the brand in the way we want.”

Launched in November 1999, the original Think was the work of a Norwegian company but was bought by Ford. It was eventually mothballed as part of the US giant’s financial cutbacks and sold to the current owners back in Scandinavia.

While Blundell won’t talk about sales volumes, it’s clear the numbers will be too low to sustain a network of showrooms. That could clear the way for an internet-based operation working out of a single site.

There’s no word on pricing yet, but it’s expected a large percentage of Thinks will be leased to urban companies eager to take advantage of the car’s Congestion Charge exemption and free parking in certain London boroughs. Blundell admitted a number of “alternative financing ideas” are being discussed.

The newcomer is still a silent two-seater with a small boot, made from a rugged thermoplastic bodyshell that doesn’t rust or dent. However, the styling is all fresh and the range has been improved – while the old car did 50 miles before the battery went flat this one will do closer to 80.

It will go on sale in London and Oslo next autumn. 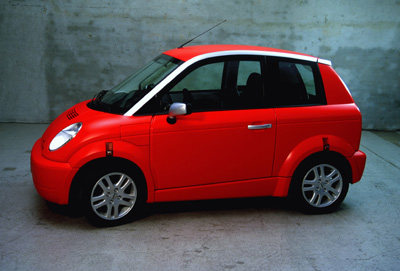