Was this article useful?
Click the thumbs up >
A new business partnership is breathing new life into the Renault dealership at the Penn-Y-Fai service station in Bridgend, which closed in September with the loss of all jobs on the site.

Business partners Andy Leyshon and Rob Flint, with the backing of their wives and families, have taken on the Renault franchise for Bridgend and the responsibility for the showroom, workshops, filling station and convenience store on Tondu Road. The new business opened its doors as ‘Leyshon Flint and Sons’ on December 1.

“We’ve re-instated Kinsey and McCoy as key departmental managers; they’re well known to hundreds of drivers here and have years of experience between them, looking after Renault owners in the area,” said Leyshon.

Leyson has been in business for 13 years with an MoT testing station and engine tuning workshop, both in Bridgend. “We’ve also recruited qualified technicians to staff the workshop, and have taken care to put the best people into sales and administrative jobs. We will continue recruiting into the New Year,” he added.

Flint spent 20 years in the petrochemical industries, latterly as a maintenance manager, before embarking on the new venture with Leyshon. “We’re keen to re-establish the site as a family-run business with an emphasis on personal service,” he said.

“It was very sad to see the site close last August but in starting up our business here, we have gone some way towards re-creating the skilled jobs that were lost as a result,” added Flint.

The business title ‘Leyshon Flint and Sons’ was carefully chosen – both men are hoping their sons will follow them into the business.

Leyshon Flint and Sons offers new and used car sales, plus servicing, MOT testing and repairs, for all Renault cars and light commercial vehicles (LCVs). The dealership is fully accredited with the Motability car scheme, which supplies cars through local dealerships to people who receive either the Higher Rate Mobility Component of the Disability Living Allowance or War Pensioners' Mobility Supplement. 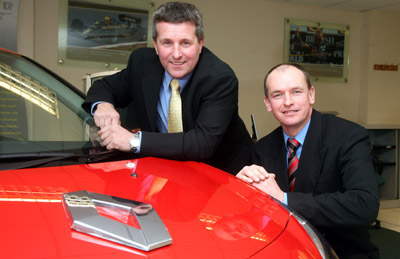