Was this article useful?
Click the thumbs up >
Kia Motors will unveil a new concept car at the Geneva Motor Show at the end of this month which acts as a precursor to its future models.

The new concept, titled ‘cee’d’ (pronounced ‘seed’), is based on the forthcoming all-new C-segment model which Kia will begin building at its first-ever European assembly plant in Slovakia from December.

"Our design brief was to create a ‘teaser’ for the all-new Kia which has been designed entirely in Europe and will make its world premiere at the Paris Show in September," said Gregory Guillaume, chief designer Kia’s European design centre.

"We wanted to introduce this concept as the starting point for the new design DNA for Kia, to highlight that this car is designed in Europe and made in Europe, to fulfil 100% of European customer needs," said Guillaume.

Full details of the cee’d concept car, the all-new Kia Sedona and the 2006 upgraded Sorento SUV will be available at the Kia stand to the press on February 28. 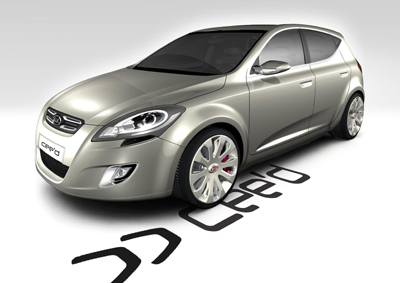