Was this article useful?
Click the thumbs up >
Proton has provided two UK customers with all-expenses-paid new vehicles for 12 months.

Customers taking test drives between October and December last year were entered into a draw to win a year's free motoring in either a Savvy or GEN-2.

Both customers will receive 12 months’ road tax, insurance and RAC cover with all servicing and warranty costs covered. In addition Proton has supplied both of the winners with £30 per week to pay for fuel.

The two winners, Jonathon Karie-Fenton from Humberston in Lincolnshire and Sylvia Thompson of Uppingham in Oakham, Leicester received their vehicles from their local Proton dealerships and began their 12 months of free motoring.

Thompson took her test drive at Adams and Sons in Morcott and won Proton's latest model the Savvy, a five door city car. 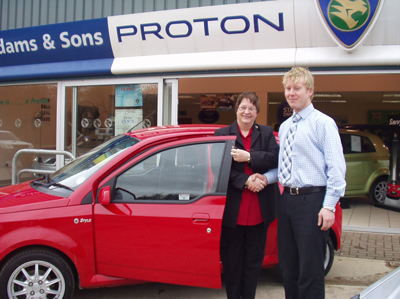